Nancy’s sentencing had been scheduled for July 10th, Clare’s for July 25th, and Kathy’s for July 31st.

Frank Report spoke with four attorneys familiar with the case. They weighed in on what may have caused Judge Garaufis to issue the Order that will delay the sentencing of Nancy, Clare, and Kathy.

Although there was no consensus among them as to the reason(s) for the delay, they all agreed that such postponements are quite common.

All of them cited the fact that the judge had just finished what turned out to be a 27-day trial that was filled with evidence and testimony that caused many courtroom observers to gasp or cry on several occasions.

So, the reason for the delays may be as simple as the judge needed to take a much-deserved break – and to let his mind clear itself of all the disgusting images that he viewed and/or was forced to conjure up throughout the trial.

That might actually be a good practice for all judges to follow in cases such as this.

Some attorneys also suggested that the delay may be tied to the complexity of the “Pre-Sentence Reports” that are being prepared by the Probation Officers assigned to each defendant.

In most cases, such reports can be compiled via public records and readily-accessible documents.

But much of what Nancy, Clare, and Kathy did for the past 15+ years was either done off-the-grid or through an extremely complex mish-mash of shell companies. 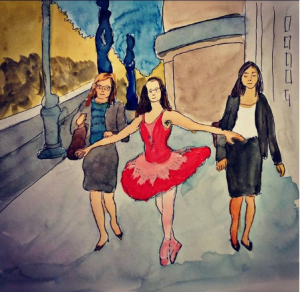 MK10ART’s splendid interpretive painting of Kathy ‘Miss Kathy’ Russell, Nxivm’s ballerina-bookkeeper who was willing to take the fall for her Vanguard.

In putting together a “Pre-Sentence Report”, a Probation Officer will usually start by interviewing the defendant.

During the course of these interviews, defendants will generally be asked about such things as their education, employment history, financial status, health, military record (if any), past and present alcohol and drug use, personal history and family history, prior criminal record, the reason(s) why they committed the crimes to which they pleaded guilty or of which they were convicted, and their version of how the events in questions occurred.

After obtaining a defendant’s responses, the Probation Officer will then go about verifying the accuracy of those responses.

Educational records will be obtained, bank records and tax filings will be gathered, interviews will be conducted with family members and friends of the defendant, and on and on.

And if you think it’s going to be tough to track down verifiable information about Nancy, Clare, and Kathy, just pity the poor bastard who gets assigned to Raniere’s case.

“Mr. Raniere, I understand that you were the East Coast Judo Champion at age 11. Could you tell me a little bit about where and when you won that title?”

Or “Mr. Raniere, it says here that you claimed to be the ‘world’s smartest man’. Could you tell me how you reached that conclusion?”

Don’t be surprised if Raniere’s sentencing is delayed for a year or so… (Just kidding!)

Another suggested reason for the sentencing delays for Nancy, Clare, and Kathy is that one or more of them is attempting to garner a reduced sentence by supplying information about other criminal acts involving the NXIVM cult and its members.

Although this would seem to make sense – especially for Nancy and Clare – it flies in the face of the persistent reports Frank Report has been hearing that the original investigation has never ceased and that additional charges are going to be brought against some of the original defendants and others who were not charged as of yet.

Unless Nancy can point investigators to a large horde of cash in off-shore accounts – or perhaps tell the truth about what the cult did to get Joe O’Hara, Frank Parlato and John Tighe indicted on bogus charges – no one may be very interested in what she has to say.

And Clare – who is quite likely going to be the target of additional charges – would have to reveal some really spectacular information in order to warrant a reduced sentence. Given that she is reportedly still loyal to Raniere – and may finance his inevitable appeals – it’s unlikely that she’s trying to trade information for a reduced sentence.

As for Kathy…what could she possibly tell investigators that they couldn’t get from other sources.

The “bottom line” here is that we may never know exactly why Judge Garaufis decided to postpone the sentencing of Nancy, Clare, and Kathy.

But it’s much more likely to be for some benign reason rather than for a spectacular one.