Last week, sources told Frank Report that Emiliano Salinas was set to leave Mexico and to ultimately end up in Cuba.

He has now left Mexico and was spotted in the UK.

Frank Report revealed that Salinas was deeply tormented and depressed about media reports concerning his role in the sex slaver cult Nxivm – and very concerned about the possibility of his indictment by US authorities in the coming months.

Cuba has no extradition treaty with the USA.

In the UK photograph, posted by a friend on Instagram, Salinas appears smiling and happy, despite being literally under siege, with Mexican media reports describing his gruesome role in the cult that brands and blackmails women as slaves.

In the UK photo, he is seen with wife, actress Ludwika Paleta, and her friend, actress Grettel Valdez and her husband, Loe Clerc, and their son.

Salinas’ happy smile may or may not be genuine. Still, he has little to smile about. Salinas faces the danger of being charged with federal racketeering conspiracy in the US – a charge that carries a sentence of up to 20 years – and he has virtually replaced his father, former president of Mexico, Carlos Salinas, as possibly the most reviled and hated man in Mexico.

Emiliano’s likely indictment is several months away at the earliest, sources familiar with the ongoing FBI investigation say.

He has a couple of months to play. To go to France or England and take a happy photograph or two – to make sure it is seen on the internet- before he has to hide in a place where he cannot be extradited if he chooses to flee from prosecution.

One of his Nxivm coconspirators, Seagram’s heiress Sara Bronfman-Igtet, is living in Provence, France, and has told friends she will never return to the USA where she fears a sealed federal indictment is already on file against her.

A Ruse to Fool the Media?

Meantime, has Salinas done a deliberate dodge, a feint?  Was he deliberately seen with Ludwika and photographed with another famous actress in the UK in order to get the Mexican media off his scent.

They supposedly met accidentally [on purpose?]

Salinas can certainly afford to travel anywhere in the world. He doesn’t have to work for a living. He is a trust fund baby. This is why he could play with Nxivm for more than 15 years.

His father may be one of the richest men on earth. His true wealth is unknown.

Salinas has some time before he has to be in a country that does not extradite to the USA.  His indictment is months away. And there remains a chance he may not be indicted.

A source close to Main Justice DOJ in Washington DC says his father, Carlos, is using all his influence-peddling skills, with loads of money, working with top Democrats in the US Congress, with Bill Clinton, and members of the so-called Arizona Mafia, to try to stave off an indictment against his son.

The threat is real. Carlos may not be able to save his son, however. With Trump in at least ostensible control of the DOJ, with his son-in-law Jared Kushner already having attempted to expose the sex slaver cult in the past, there may be little support to spare one of the prime coconspirators of this brutal group for criminal prosecution.

If he is indicted, will Emiliano surrender to US authorities to be tried in the USA?  Or will he flee the jurisdiction? Is Cuba on the top of his option’s list, as sources say, and the recent Instagram photo a clever ploy?  These are the questions and we will soon find the answers.

For now, if he is not quite a hunted man, he is one so despised in Mexico that he cannot remain there. And he dare not go to the US where he might be arrested.

Ironically, the actress who published the images with him has been reviled herself and lost followers and fans. 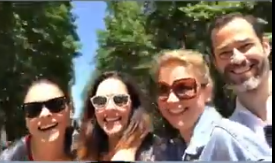 Salinas is now such a pariah that he cannot even pose for a photograph to prove he is not in Cuba without causing career damage to the ones he poses with.

Grettel wrote on her Instagram photo, “You only live once, but if you do well, surrounded by wonderful people, this time is enough to be happy.”

Paleta wrote: “I love you, mommy! What a joy we met up, I wish it had been longer”.

Some of Valdez’s followers wrote nasty messages as comments on the post.

Carmen Laura Collazo wrote, “Surrounded by wonderful people. With that man of the cult, I would be ashamed to be seen with him. ”

Another wrote, “After listening to all the audios of this mentally ill, I’m going away with grief.”

Another wrote, “You really like me, but net, are those your friends?”

Natthabh wrote: “I hope they catch Emiliano Salinas and he pays for his crimes. Thank you Grettell for notifying where you are going. ”

Teyluna decided to stop following the actress: “Out of my networks! … Goodbye, goodbye to my sight. ”

Salinas Quit When Raniere Was Arrested

Along with his lover and business partner, Alejandro ‘Alex’ Betancourt, Salinas headed Nxivm operations in Mexico for 15 years.  When Raniere was arrested in March 2018, Salinas quickly distanced himself from the scurrilous one.  But their years together made it hard for him to simply wipe the slate clean.

Frank Report will later detail evidence of crimes Salinas’ is suspected of. These include emails that suggest a plan to kidnap Raniere’s female enemies and have them imprisoned, raped and possibly killed, after luring them to Mexico.  Salinas helped set up a plan to bring false criminal charges in Mexico against four women [Toni Natalie, Barbara Bouchey, Kim Woolhouse, and Susan Dones] by bribing a judge, so they would be imprisoned.

In addition, Salinas had a role in a plot to illegally spy on US federal judges, US Senator Chuck Schumer, and several of Nxivm enemies including this writer.

Additional charges may be brought against Salinas for his role in extorting Nxivm enemies, especially DOS slaves who sought to escape the cult without their collateral [blackmail worthy material] being released, into silence by threatening them with arrest on bogus charges in Mexico.

This occurred after news of the branding and blackmailing of women by Nxivm was first published by Frank Report.

Emiliano’s wife, Paleta, who was also a member of Nxivm, has never made a public statement about her role in the sex slaver cult.  She recently placed her Albany NY home for sale. The home was within easy walking distance from the home of Keith Raniere who liked to mentor attractive and slender women through sexual techniques.

The Exploration of Space as a Project of Humanity

The Power of THE BIG LIE

What is the most commonly used method in social science research