Allison Mack did not fare too well at the trial. In fact, at times she came off looking like a stinker and at other times like a perv.

It was June 7, 2019 in the trial of Keith Alan Raniere.  Nicole, a DOS slave was on the witness stand.

Nicole had been testifying for hours about her slavery to Allison Mack and Keith Raniere and how she was increasingly required to provide collateral for Mack, her slave master, and for Raniere, who was her “grandmaster.”

Assistant US Attorney Moira Penza is doing the examination of Nicole.  She is asking Nicole about an experience she had in 2016 at the home of Michelle Hatchette – who, like Nicole, was a slave of Mack’s.

Penza: Turning your attention to October 2016, did you end up going on a trip with Allison Mack?

Q Can you explain?

A It was Michele’s birthday, and her family had a home in the Berkshires. And, so, we all, all … five of us, Danielle [Roberts], India, Allison, Michele and I, all drove out to the house in the Berkshires for the weekend.

Q And how was the trip?

A Per many things that happened, like, a mix of emotions.  It was supposed to be… a bonding trip, and some of it was nice. We went on a hike, which is always nice to get out of the city, and we kind of explored one of the small towns… outside the Berkshires, and we made dinner together. So that part …  felt okay. It felt, like, kind of like bonding, and those were moments that weren’t as bad…

Q Did something happen after dinner?

A Yeah. It had been, like, a really nice day, actually, and then after dinner, Allison [said to us] ‘As much as I would like this to be just a bonding trip, it’s not. ‘ Oh, gosh, like, what’s coming? And she said, ‘I have another assignment for you guys. I am going to take a close-up photo of all of your pussies’…

Q How did you feel when she said that?

A Yeah. [I said] ‘absolutely not’ … I [said] ‘no.’ And I don’t remember what her actual… response was, but it was a back-and-forth that I lost. Because then [Allison  said] I couldn’t behave like that. I couldn’t defy her like that, so it was like, ‘No, you’re doing this.’

We had just finished the family photo, [where the slaves posed together nude for a picture to send to  Raniere] so I already had to go through the family photo situation. We put back on our clothes and she told us this. And I was just, like, ‘you’ve got to be kidding me. You’ve got to be kidding me.’ And, so, [we] took off all our clothes again and stood in a line. And Danielle, I think, went first…

Q As each person goes — so, you and the other three women are standing in a line?

Q And where is the actual photo being taken?

A On the couch….   you had to sit on the couch, spread your legs, and Allison was standing right there with…  her camera phone, and she would take a picture.

Q And was it, in fact, a very close-up picture?

A I think so. I certainly did not ask to look at the picture, but, yes, it was —

Q It was focused on your vagina?

Q So, it’s a line of the four of you. Danielle goes first?

A I think so. I don’t remember the exact order.

A I know I was last.

Q And what happened when you went? Did she say anything to you? 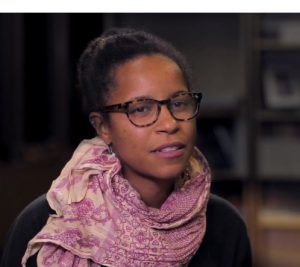 A Well, she said something when Michele went.

Q What did she say when Michele went?

A She said — … she looked at the photo and just kind of said, ‘Beautiful cunt.’ And I was just like, ‘God, what?’ I just was grossed out. And, yeah, and I just waited for my turn and I was, like, really angry. Really angry.

Q And the picture was taken of you?

Q And what happened afterward?

A She [Allison] made some comment like, ‘See? That wasn’t so bad.’ And I …  just remember my jaw being…  set because I was so angry and I was…  trying to …  swallow my words. So, I just stopped speaking. I refused to speak.

And she made us sit down and… talk about…. how we felt  … and I wouldn’t speak. And then she’s just [said to me]  ‘Oh, are you…  still throwing a fit over there?’ And then she said, ‘You have to answer me.’  … I don’t know, the only way I could think of, like, getting some kind of power back, [was] not speaking to her, and then she made me answer whatever stupid question she had asked me.

I just remember being really angry and, also…  really unnerved because … I know these pictures … are being sent to Keith and that … makes me,… grossed out and disgusted and … I was very unhappy.

For those who wonder about it and debate the role of Allison Mack, a question: Did she enjoy this experience described above – or was she – because she was collateralized too, like Nicole, forced to do her master, Raniere’s bidding?

if Nicole was a victim because she had collateral, was Allison a victim also?