[This post is meant a little more for our Mexican friends – who now account for about 25 percent of our audience – than the US audience – who may already know most of what I am reporting here.]

Ludwika Paleta, the famous actress wife of Emiliano Salinas, canceled her public appearance as the godmother of Mentiras el musical.

Salinas, the son of former Mexican president Carlos Salinas, was the leader of Nxivm [AKA Executive Success Programs] in Mexico.  He was directly under cult leader Keith Alan Raniere.

Best Theater announced that “by decision of the producers… Mentiras is postponed, scheduled for today (yesterday) Thursday, May 23 … Later, we will inform the public as to the date on which it will resume”.

This was obviously a last minute cancellation. The event was scheduled for 7:30 p.m.; the notice of cancellation was released at 4:22 PM.

This could be due to the firestorm of publicity Emiliano Salinas has been getting in Mexico during the last few days for his own starring role in the sex cult Nxivm.

Major television, print, and online media have announced – following the Frank Report – that Salinas was named in open court as a criminal co-conspirator during the trial against cult leader Keith Raniere.

Frank Report provided transcripts to major Mexican media to ensure they knew about Salinas’ mention in court – which did not appear in any other US press, as far as we know.

To date, Salinas has not been charged with any crimes.  In addition to Raniere, five Nxivm members have been charged and pleaded guilty to various federal crimes. The FBI investigation is ongoing and other arrests are possible in the coming months.

Raniere has pleaded not guilty to all charges and has just completed his third week of trial. Another four weeks of trial are expected.

Emiliano may or may not be arrested. Sources say powerful political influences are at work to try to ward [buy] off his indictment in Washington DC at the [Orwellian named] US Department of Justice.

During his 15-plus years with Nxivm, Salinas was partnered with lover Alejandro ‘Alex’ ‘El Duce’ Betancourt in running Nxivm’s operations in Mexico. 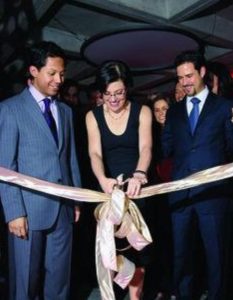 Nxivm president Nancy Salzman cuts the ribbon opening up the Mexico NXIVM center. Alex Betancourt [l] and Emiliano Salinas [R] are with her.

Betancourt was nicknamed ‘El Duce’ because cult leader Raniere told him he was Benito Mussolini in his previous life.

Betancourt – who blindly obeyed his cult master’s commands – reportedly felt guilty for the crimes he committed when he was Mussolini and vowed to follow the “ethical” Raniere to atone for the carnage he [as Mussolini] had created during World War 2.

Emiliano was also ordered by Raniere to begin sexual relations with Betancourt. According to Nxivm insiders, Salinas did not even know he was gay until cult leader Raniere told him.

Yes, this is the extent of control and brainwashing Raniere had over his followers.

Still, Salinas’ heterosexual tendencies could not be entirely extinguished. He married sexpot actress Paleta in 2013 and the couple seemed to have a genuine relationship at first, according to Nxivm insiders.

Nxivm insiders also report that Salinas and Paleta maintained an open relationship. According to one married woman who was propositioned by Salinas, his pickup line to her was, “My wife sleeps with other men and I sleep with other women – and men.”

Another woman told Frank Report that Salinas would text a married woman he was trying to seduce with texts like “I’m having sex right now, but I’m thinking of you.”

The married woman told Frank Report she declined his advances.

Salinas employed Instagram to state, “I categorically condemn and reject … the practices that were carried out within the group called DOS.”

Evidence, including audio recordings leaked to Frank Report, show Salinas knew all about the branding of female slaves and the taking of blackmail-worthy material [called collateral.]

The recording was made shortly after Frank Report revealed to the world the existence of DOS and its branding practices in June 2017.

In 2017, Emiliano and Ludwika had twins in California.  Ludwika pretended she was pregnant, but Frank Report revealed the couple hired a surrogate mother living in San Diego to carry and give birth to the twins.

Around this time, Ludwika bought a $500,000 home near Albany NY – a short walking distance from the home of Raniere.  Following Raniere’s arrest, Ludwika placed her Albany home up for sale.

In the past, many photos of Emiliano and Ludwika were published on social media. But, for more than a year, the two have not published an image together.