The Vanguard is finally out of the Special Housing Unit (SHU) at the Metropolitan Detention Center (MDC) – and living back in the Sexual Offenders Unit. That’s especially good news for him because it means that he’s no longer being threatened on a daily basis by the two guys that roughed him up a few […]

The Vanguard is finally out of the Special Housing Unit (SHU) at the Metropolitan Detention Center (MDC) – and living back in the Sexual Offenders Unit. 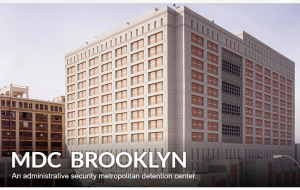 That’s especially good news for him because it means that he’s no longer being threatened on a daily basis by the two guys that roughed him up a few times while he was temporarily in MDC’s general population (They were in the SHU the same time that he was – and, oddly enough, they were often scheduled for the same 1-hour per day out of their cells “free period” that he was).

And better yet, he’s back to ordering stuff from the MDC Commissary – which, of course, means that someone is putting money into his account again (Maybe that plea that the Frank Report made for donations to his account actually worked!).

But it may not be Clare who’s sending him cash these days (Even though he used to routinely drop her name into conversations with other prisoners, he reportedly hasn’t mentioned her name to anyone for the past few weeks).

Instead, it may be one – or, knowing The Vanguard, both – of his new gal pals who are coming to visit him on a regular basis.

Both women are described as being in their 50s, blond, very attractive and very skinny.

So, while The Vanguard may have expanded the age-range of women that he’ll spend time with, they still need to be attractive and thin if they expect him to hang around for very long.

Raniere has bragged to some of his fellow inmates that both women contacted him after they read about him in local newspapers (They never visit him at the same time).

And as strange as that may sound to some readers of the Frank Report, it’s entirely plausible.

“Prison Groupies” actually exist – and the more media attention an inmate has had, the more likely they’ll be contacted by such people (Just wait and see how many men contact Allison Mack once she starts serving her prison term!).

For a little insight into “Prison Groupies”, check out this article from https://familyarrested.com.

Meanwhile, except for picking up some new gal pals, our favorite federal prisoner has still been experiencing several medical problems.

The limp is getting more pronounced as the entire team of crack physicians on MDC’s medical staff have still not been able to figure out the root cause of the problem.

Is it one of his square feet – or his back – that’s causing The Vanguard so much pain and discomfort?

Or does he just like getting out of his cell for more visits to the MDC Medical Unit?

No one seems to know the answers to these very important questions.

And the Vanguard’s tummy is acting up again – which is another ailment that, as of now, has gone undiagnosed.

So, he’s being tested for more allergies – and given more antacids to deal with his upset stomach issues.

But, alas, the medical staff have still not ordered that he be given hot sauce to put on all of his food – which is obviously what he needs.

Keith has also been telling anyone who will listen that Nancy, Lauren, and Allison were “fools” for pleading guilty to any crimes – and agreeing to testify against him.

As he put it, “They will pay for their sins a thousand times over – and be sitting in prison” while he is acquitted of all charges and walking free.

At least that’s what he’s been telling his home-boys in the Sex Offenders Unit.

And it’s not like Keith is a guy who is likely to exaggerate or overstate his status, right?

Those who interact with Keith at MDC are evenly split as to what his true state-of-mind is.

Half think he’s totally bat-shit crazy, delusional, and no longer in touch with reality.

The other half thinks that he is 100% rational – and truly believes, as he puts it, that he’s “going back home a lot sooner than anyone expects”.

Well, Keith, not to be a Debbie Downer, but here’s what I think:

YOU ARE GOING TO DIE IN FEDERAL PRISON!

I don’t know how long it’s going to take for that to happen.

But the only way you’re getting out of prison is in the proverbial wooden box.

You’re not tough enough to survive any significant amount of time in prison.

And, regardless of whether you take a plea deal or you go to trial, you’re going to end up with a longer sentence than you can serve.

And dream of the freedom that you’re never going to experience for the rest of your life.