With each felony comes a possible 20 year maximum sentence. There is no minimum sentence. Because of her lack of a previous criminal record and sentencing guidelines she will probably land in the 3-5 year sentencing range.

Her plea deal is the same as Lauren Salzman’s. And this is a tremendously fortunate plea deal for Mack since she will avoid all sex trafficking charges, charges that could have landed her in prison for more than 15 years and required her to register as a sex offender when she was released.

It is expected she will be a cooperating witness.

Our correspondent Village Diane was on the scene and reports on Mack’s allocution:

Miss Mack started out by saying, “I’m here to plead guilty.” And then she broke down and started crying, enough so that the judge asked her if she wanted to take a moment, but she said “no.”

She was still in tears as she spoke about the past year of her life. [She was arrested on April 20, 2018]. She spoke of the past year, as “a year of introspection.”

After seeing her second superseding indictment, she realized she was mistaken in who she placed her trust with and who trusted her.

She said, “Looking back at what I have done the past 10 years,” she said she is prepared to take “full responsibility.”

She met many wonderful people in Nxivm and joined at a time when she was lost and wanted a community.  She believed the people she was with were trying to be better people.

She said she was trying to help herself and others.

She thought Keith Raniere was trying to help people, but now she realized she was wrong.

She participated, she admitted, in criminal conduct resulting in her agreeing to support a criminal enterprise from 2016 to April 2018. She was aware of the criminal objectives of the enterprise.

She admitted she withheld property from Jane Does #5 and #8. She admitted that she committed acts that made women fearful she would release their collateral if they did not do what she demanded.

She admitted she made false representations regarding DOS, and concealed Keith Raniere’s role as the leader of DOS.

As she continued to speak, her voice grew stronger.  She said she had many months to reflect on her actions.

“I must take full responsibility.”

Then she started crying and said she was very sorry for the harm she cause and apologized “from the bottom of my heart.”

She apologized to the judge and the prosecution.

She said, “I will be a better person as a result of this.”

Her lawyers put their hands on her back afterwards.

Village Diane had these additional observations:

Miss Mack is definitely off the Nxivm diet. She had rounded hips and a woman’s body now. [another sign of her break from Raniere.] She had on a long sleeve shirt, with black pants. Her hair was tied back in a messy bun. 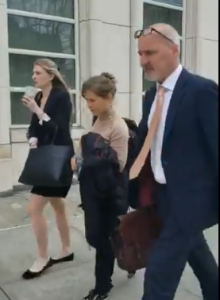 K.R, Claviger adds to our report:

The third seat on The Plea Deal Bus has been claimed by Allison Mack.

The erstwhile actress, who played Chloe Sullivan on the Tv series Smallville, has decided to cut a deal with the feds and avoid going to trial in the case of the U.S. v. Raniere Et Al.

Per the terms of her plea deal, Mack will plead guilty to Rackettering and Racketeering conspiracy.

Based on the terms of the second superseding indictment in the case, Mack had been facing the following charges:

Although Mack will almost definitely end up serving time in federal prison, the exact amount of time she will serve – and the other penalties that will be imposed on her – won’t be known until she is sentenced on Sept. 11.

But just like the other defendants in the case who have pleaded guilty to various charges, Mack will undoubtedly receive less than the maximum possible sentence.

Mack was born on July 29, 1982 in Preetz, West Germany. At the time of her birth, her opera singer father, Jonathan, was performing there.

Since her indictment in April 2018, Mack has been living in her parents’ home in Los Alamitos CA under home confinement (The home was part of the $5 million package that Mack had to post in order to be released on bail).

Mack has a brother named Shannon and a sister named Robyn. It is not known if Mack ever tried to recruit either of her siblings into the NXIVM/ESP sex slave cult.

As part of her collateral that she gave to Keith Raniere, she wrote a letter to social services which he held in which she claimed her nephews were abused.

Mack’s involvement with NXIVM/ESP began in 2006 when she was recruited by her Smallville co-star Kristin Kreuk, to attend classes at the cult’s Vancouver Center that was run by Sarah Edmondson.

Almost immediately after they began taking classes, Mack and Kreuk were targeted by NXIVM/ESP leaders because of their “star power”.

Mack moved to Clifton Park, NY to be closer to Keith Raniere and basically abandoned her acting career at his direction.

Mack rose quickly through the ranks in NXIVM/ESP – and became one of Raniere’s favorites.

As evidence of his close relationship with Mack, Raniere allowed her to set up The Source, a “school” for wannabe actors.

Potential recruits for The Source were brought to wine and cheese parties – and shown a 90-minute video of Raniere and told that he could jump-start their acting careers. Then they were asked to sign-up for a $10,000 introductory course.

When Raniere decided to create Dominus Obsequious Sororium (DOS), he chose Mack to be its leader – which was a significant slap-in-the-face to the somewhat older Lauren Salzman who been promised an “avatar baby” by Raniere.

Things came full circle when Lauren Salzman recruited Sarah Edmondson into DOS. According to Edmondson, she was initiated into DOS – and branded with Raniere’s initials on her pubic region – in a ceremony that was conducted at Mack’s home in Clifton Park.

Mack was with Raniere when he was arrested by Mexican police on March 26, 2018 – and she was one of the women who jumped into a car and chased after the Mexican police as it transported Raniere to the U.S./Mexico border.

And so, Allison Mack completes the transition from semi-successful Hollywood actress to failed human being…

ONE NATION UNDER CONTROL
Confirmed: Allison Mack will plead guilty today at 11:30 am
Comment