What’s she hiding? Thus far, New York State Senator and Presidential candidate Kirsten Gillibrand has chosen to go with a fairly innocuous, “I never heard of that group” response whenever she’s been asked about the NXIVM sex cult. It was Frank Report that first broke the story about ties between NXIVM and Gillibrand. Our original […]

Thus far, New York State Senator and Presidential candidate Kirsten Gillibrand has chosen to go with a fairly innocuous, “I never heard of that group” response whenever she’s been asked about the NXIVM sex cult.

It was Frank Report that first broke the story about ties between NXIVM and Gillibrand.

Our original reporting was motivated by Gillibrand’s claim that then-President Bill Clinton should have resigned over the Monica Lewinsky scandal.

At that time, we simply summarized what we knew about the involvement of her father, Doug Rutnik, with NXIVM – and asked that she hold hearings “about whether law enforcement on the federal level should conduct a serious investigation (into NXIVM)”.

No such hearings were ever held.

We followed up with a second story that provided more details of Doug Rutnik’s work for the NXIVM cult – and a copy of the “Settlement Agreement” he entered into with them back on June 29, 2006.

In addition to being sued by NXIVM itself, Rutnik had also been sued by several of the High-Rank members of the cult. Those included Alex Betancourt, Edgar Boone, Barbara Bouchey, Clare and Sara Bronfman, the late Pamela Cafritz, and Nancy Salzman.

In that same story, we also reported that NXIVM had stiffed the law firm that represented it in its lawsuit against Rutnik – and ended up having a $974,000 judgment against it awarded to the Proskauer Rose law firm.

The allegations in the suit were that Rutnik had not delivered on promised consulting services for which he was paid $25,000 per month and that he had sexually harassed Nxivm president Nancy Salzman.  Rutnik settled the lawsuit by paying Nxivm $100,000, the sum total of his four month’s of consulting fees.

Our probing about Gillibrand’s ties to NXIVM eventually prompted legendary journalist Richard Johnson to write a piece about her ties to NXIVM in his Page Six column in the New York Post.

It was in Johnson’s column that Gillibrand first adopted her strategy about how to deal with this matter. As quoted therein, a spokesman for her said, “Sen. Gillibrand had never heard of this group until she recently read about them in the newspaper.”

And, thus, Sen. Gillibrand became locked into a narrative that is both ludicrous and insulting to her constituency.

We next revealed that Gillibrand’s stepmother, Gwen Bellcourt, also had been involved with the NXIVM cult. In fact, it was her deep involvement with the cult and Doug Rutnik’s determined efforts to extract her from its clutches that eventually turned into a love affair that resulted in their marriage shortly after she left the cult.

But still, Sen. Gillibrand maintained that she had never heard about NXIVM before she read about it in the newspapers back in the Fall of 2017.

When Gillibrand was running for reelection in 2018, her opponent, Chele Farley, raised questions about the Senator’s lack of knowledge about NXIVM.

“Kirsten Gillibrand is a complete and utter hypocrite. She has been extended the benefit of the doubt and due process in sloughing off questions about her ties to a notorious sex cult [NXIVM], yet has presumed Judge Kavanaugh guilty without providing the same,” said Farley.

Farley continued, “Throughout this campaign, I have called on Kirsten Gillibrand to explain how she failed so badly to protect women in her own backyard, despite mountains of evidence to the contrary – Kirsten Gillibrand has simply claimed ignorance. Judge Kavanaugh has denied actions that occurred 35 years ago with even less evidence and deserves due process.”

The Frank Report’s next big scoop on Gillibrand’s connection to NXIVM came when we broke the story about her sitting at one of the three VIP tables that the cult had purchased for a Hillary Clinton fundraiser in Saratoga Springs, NY back in 2006.

Seated next to Sen. Gillibrand was none other than Nancy Salzman, the President of NXIVM – and the first one to plead guilty in the current U.S. v. Raniere case. 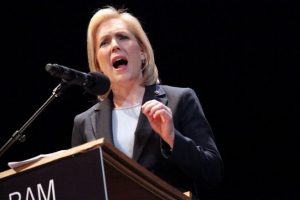 “Believe the woman,” says Kirsten Gillibrand, a woman you can believe.When Gillibrand first announced that she was considering a run for the U.S. presidency, she brought along her husband, Jonathan – and her two sons, Theodore and Henry for the announcement. Also accompanying her was her mother, Polly Noonan, Doug Rutnik’s first wife.

But daddy Doug and step-mom Gwen were nowhere to be seen at the event.

Nor, as far as we’ve been able to ascertain, has Gillibrand ever mentioned either of them during her many campaign speeches.

Most recently, Big League Politics ran a story detailing the ties between Doug Rutnik and the NXIVM cult.

As Frank Parlato, publisher of Artvoice and Frank Report was quoted in that story, “Her father Doug Rutnik came to work as a consultant for NXIVM…he was fired, they sued him, and he had to pay them $100,000”.

And so, here we are in April 2019 – and Sen. Gillibrand is still sticking by her story that the first time she ever heard of NXIVM was when she read about them in the newspapers in the Fall of 2017.

Even though her father, Doug Rutnik, worked for the cult, was sued by them, and had to pay them back $100,000.

Even though her stepmother, Gwen Bellcourt, had become personally enmeshed in the cult – and had to be rescued from it by Doug.

Even though the major newspaper in the area where she lives, the Times Union, ran an award-winning series about the cult back in February 2012.

Which just leaves these questions for Sen. Gillibrand:

What are you hiding about your involvement the NXIVM cult – and why are hiding it?

What is Gillibrand hiding about her relationship with NXIVM sex cult?
How Far Could Raniere Have Gone Before He Hit Tilt?
Comment