Dr. Danielle Roberts – we reported yesterday– appears to be alive and well and living in Long Island, Suffolk County, NY – to “start over” and is featured on the Navel Expo’s website. While she is not listed as a featured speaker, Dr. Roberts evidently will be a guest at the Naval Expo’s sponsored Science […]

Dr. Danielle Roberts – we reported yesterday– appears to be alive and well and living in Long Island, Suffolk County, NY – to “start over” and is featured on the Navel Expo’s website.

While she is not listed as a featured speaker, Dr. Roberts evidently will be a guest at the Naval Expo’s sponsored Science of Human Optimization Conference with Joel Fuhrman, MD on April 27–28 in Long Island at the Hyatt Regency.

This prompted one of my sources, who brought it to my attention, to ask, “Why the hell hasn’t she been indicted and charged????”

Well, obviously she has not been indicted since her appearance as a guest at the conference is the weekend before the trial is scheduled to commence for the Nxivm defendants, including Allison Mack, who is Dr. Roberts’ slave master in their secret sorority [headed by a man].

Dr. Roberts is also pictured as part of a group under the name Physicianinc.com, under the caption “Meet some of the most remarkable healers, bestselling authors and celebrity activists…” 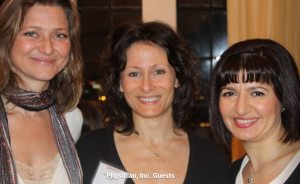 As one can see from the photo, Dr. Roberts will apparently be a guest at the conference on April 27-28 and those interested in meeting her can likely get an audience and ask her questions about her views of health and wellness.  Tickets start at $20 for a one day pass.

Another source tells me that Dr. Roberts now lives in Port Jefferson Station, in Long Island, and has been seen working out at a fitness center in Nesconset, NY., about eight miles from her home.

The debatable question is whether Dr. Roberts deserves the privacy of a normal doctor – free from hounding reporters and nagging questions. Whether she should be allowed to resume a life of obscurity – known only by the fruits of her work as a healer – and not by the ignominy of being Keith Raniere and Allison Mack’s branding doctor and their lifelong avowed slave.
This also begs a second question. If there is a conflict between Dr. Roberts’ Hippocratic Oath and her Vow of Obedience to Allison Mack as her master and Keith Raniere as her grandmaster – which must be obeyed first and foremost?
Dr. Roberts provided collateral to Keith Raniere and Allison Mack and some of it was leaked to Frank Report. I promptly turned it over to an attorney with the instructions to forward it to law enforcement.
This is a woman who clearly trusted Raniere and Mack – for the nature of her collateral is such that it could destroy her medical career.
But has she done anything wrong?
As one reader, using the moniker, Ex-Nxian, wrote, “Branding is legal. … There are many people who prefer scarification as a way to get artwork on their body…  There is no need for her to lose her license as she didn’t violate her medical code of conduct. On the other hand, people should be thankful for her being the one who did the branding and not someone who had no experience in health.”
It was once estimated by the Raniere defense team that about 150 women were branded.  These women today carry the mark of Keith Raniere on their pubic region. It is hard to imagine how a doctor like Danielle Roberts could have ever thought that was a good and healthy idea.

Help Nancy get a better reputation and notes along the Vanguard trail
Breaking News: Magistrate Scanlon denies suppression of evidence for Raniere and Bronfman
Comment