Yes, Allison Mack is a globe-trotter.  A glance at Allison’s travels, as revealed via social media, shows she has been to Paris, London, Wales, Ireland, Canada, Mexico, Colombia, and Ecuador.  Often, these trips were to Comic Cons arranged by an agent to meet and greet fans.

In 2013, Allison traveled to Mongolia and visited a Buddhist temple. 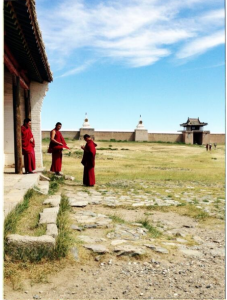 Allison Mack?Verified account @allisonmack
She writes above the picture: “Home from an incredible trip. The wild Wild West of the east. Mongolia, the final frontier.”  [5 Jul 2013]  Allison Mack on Twitter
Allison’s domestic travel includes San Diego, Los Angeles, San Francisco, Tampa, Detroit, Washington DC, Massachusetts and numerous trips between Clifton Park and Brooklyn.
Not many impoverished prisoners enjoy such extensive travels.
[Right now Allison only travels back and forth from Brooklyn to court from Las Alamitos, California – where she is subject to home confinement at her parent’s home, as she awaits trial on sex trafficking charges.].
At no time in the last six years, until she was arrested, did she lack access to smartphones, computers, and the internet.  Allison’s laptop is an Apple.
During her time at Nxivm, Allison Mack was a well-to-do woman who traveled the world and enjoyed a comparative life of leisure with relatively little work.  She was not a prisoner.  She was not isolated, not brainwashed.  She was not impoverished in spite of wasting a lot of money on NXIVM.
She owned a Clifton Park townhouse and rented another townhouse with Nicki Clyne.  She lent money and financial aid to Dr. Porter to purchase a house on Oregon Trail.  And Mack was able to afford a $3,000 dollar per month apartment in Brooklyn too.
On the one hand, she was a modern-day Holly Golightly character, taken from the pages of Truman Capote’s “Breakfast at Tiffany’s”. But there was a darker side that was evident to some for a while.

As early as 2012, Joe O’Hara, in a lawsuit, claimed that Allison Mack was involved in serious financial crimes like money laundering and tax evasion.

In the end, Allison Mack chose of her own free will to associate with Keith Raniere, Nancy and Lauren Salzman and Clare Bronfman.  She chose to engage in serious criminal behavior with her NXIVM co-defendants.  She was not the physical or psychological prisoner of Keith Raniere and the Salzmans.

So please, Heidi, don’t regard Allison Mack like a child.  She is an adult who chose to engage in a life of crime and she hurt a lot of people.