Keith Alan Raniere – known to the world as Vanguard – was before Judge Nicholas Garaufis today for his Curcio Hearing.

The hearing was convened to determine if Vanguard understands the potential for a conflict of interest with his present attorneys since they are being paid by his co-defendant, Clare Bronfman, through a trust she established subsequent to his arrest on March 26, 2018, and prior to her own arrest on July 24th.

Raniere spoke directly to the judge, perhaps for the first time ever, declaring he was happy with his lawyers, Marc Agnifilo and Paul DerOhannesian.

Raniere said, “I have the right to have an attorney that holds my interest above all others. I believe my attorneys do, and I have confidence in them.”

Appearing in a handsome greenish-brown jumpsuit, and with a remarkable shock of black hair with a couple of splotches of grey where the dye missed, Raniere looked considerably heavier than when he was the sleek and athletic Vanguard – the delight of the eyes of his numerous female harem members.

He also appeared in prison shoes that seemed strangely too large for his feet prompting some to compare them to the over-sized shoes worn by clowns for comedic effect.

During the proceeding, the judge asked Raniere a series of questions to ascertain if he clearly understood the potential conflict and advised him that he might qualify for a taxpayer-funded public defender.

Raniere seemed to answer the questions with succinct clarity and reportedly called the judge “Your Honor.”

Ironically, the judge did not reciprocate the honorific by calling him “Vanguard” and also evidently did not bow when Raniere entered the courtroom.

It is not immediately clear how the judge reacted to the dulcet tones of the Vanguard whose IQ, he has stated, is 240, but, based on the opinion of several legal observers watching the case, and his own assertion that he understands the potential conflict, it seems likely the judge will permit Raniere to continue to be represented by his present attorneys.

It is not known whether any of the jail food is spiced with garlic – for which Raniere has an aversion -which, in turn, has prompted his increasing plumpness, but, by all indications, Raniere has been unable to resist the food in jail in all forms – including meat and is known to lick his platter clean at every meal.

His evening fare reportedly consisted of two savory hot dogs with one bun, on a bed of edible potato salad, delectable baked beans in a brown water sauce that was more than generously added to enhance the quantity of the beans by weight, and a heaping helping of aged, nearly frozen cole slaw.

For beverage, Raniere got to enjoy a generous 4 oz cup of fruit juice. Our jailhouse source, however, was unable to immediately identify which fruit it purportedly was originally made from. 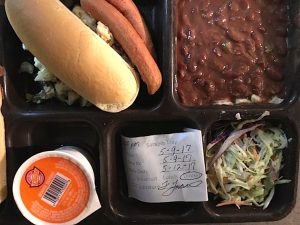 It may sound redundant; it may sound trite, but I think it may be fairly stated: Viva Executive Success!