The New York Post reports that Crowd cheers as two pedophiles are executed in Yemen.

So, I’m guessing this means that if he ever gets out on on bail, Vanguard is not going to flee to Yemen.

But there could be a consolation prize too: Dr. Brandon Porter could use the video of their execution to show women in his human fright study.  The problem of course with this is that the ones being executed are men and I understand Dr. Porter prefers to show his female subjects only videos of women being raped and murdered. 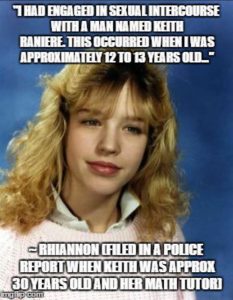 According to the Post, “Chilling photographs captured the moment two pedophiles were executed in front of a large crowd in Yemen’s port city of Aden for raping and murdering a 12-year-old boy.”

“… A 33-year-old female relative of one of the accomplices also was sentenced to death for helping to dismember the child’s body, but her public execution was postponed because she is pregnant….”

“After being marched at gunpoint to the execution site, the two brutes were offered some water by a doctor before they were ordered to lie face-down on a blanket.

“Two men then stood over them, pointed AK-47s at their backs and opened fire as a large throng cheered in the background.”

Now in this bloodthirsty land of savage Frank Report readers, those who know the tale of how Keith Raniere raped 12 year old Rhiannon – who he was supposed to tutor in Algebra – and are outraged by it — they might wish for the same kind of punishments enacted in this land.

But I urge you to not be so cruel – to consider an eye for an eye. Keith did not murder Rhiannon. He only raped her some 60 times until she ran away from home and was caught and placed in a teen home. While she was there, she contracted cancer – quite possibly from the stress and worriment of being hunted by Raniere.

She recovered from her cancer [probably because she got away from Raniere.]  She told the people at the girl’s home that she had been raped by Raniere.  They reported it to police who told her that the only way they could arrest the future Vanguard was for her to wear a wire and go see him and entrap him into a confession or possibly even an attempt at another rape.

The little girl was terrified at having to go in front of the world’s most ethical man and declined to confront him.  The police declined to investigate further. This was early 1990s.

Raniere went on to rape many more women and girls and start a company called Nxivm dedicated to creating a more noble civilization.  Too bad he didn’t start it in Yemen.

Mexican girl named as ‘genius’ rivals Raniere for childhood accomplishments – except hers are real
Two attorneys excused from in person appearance at Monday hearing, Lauren required to attend however
Comment