Catherine Oxenberg has had a tough year-and-a-half. But it was crowned with some victories.

She found out about her daughter, India, being branded in the spring of 2017.  In late May 2017, she contacted me for the first time to tell me about the incredible fact that Keith Raniere and his ghouls had branded India and other women.

I published the first branding story on June 5, 2017 – and it rocked NXIVM causing an exodus of DOS slaves. But India remained.

In mid-October, with Catherine, Sara Edmondson, myself and others as sources, the NY Times came out with their shocking branding story which corroborated my stories.  The Times story got worldwide attention – and attracted the interest of the FBI in the Eastern District of NY.

What followed was Raniere’s arrest on March 26, 2018, followed by Allison Mack’s arrest, April 20. This was followed by a superseding indictment and the arrest of Clare Bronfman, Nancy Salzman, Lauren Salzman, and Kathy Russell on July 24.

Catherine was threatened with litigation and possible death threats by the Mexican contingent of NXIVM.  Her daughter was defiant and blamed her mother. Even her ex-husband fought her efforts to get her daughter out – chastising Catherine for exposing the fact that India was in a cult.

Catherine’s book, “Captive”, was published – and revealed what she knew about the cult and her daughter’s involvement in it.

Finally, the weight of common sense, Catherine’s efforts, and perhaps the fact that India found a non-cult boyfriend – something she would not have been permitted to do under the rule of the pig-like Raniere – led India to break from the filthy cult.

With mother and daughter reunited, Catherine purchased a new home in Malibu. It was a time to rest and heal. She moved in with India and her other daughters and, sadly, within four days, the Malibu fires consumed her home.

Fortunately, no one was injured, but they lost most of their possessions. Her cats were saved but, unfortunately, her pet chickens were lost in the blaze. 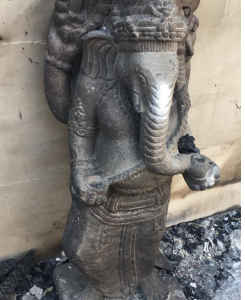 The statue above was the only thing that survived the fire. It is the Hindu god Ganesh – the god of fortune and prosperity. He is the god to supplicate to overcome adversity.

Ganesha’s survival may indicate success will prevail for Catherine and her new fire-borne obstacles will be overcome – despite the apparent adversity.

Much like it happened with her rescue of her daughter – she went through many sorrowful days.  But she overcame adversity and India was led out of the vicious cult of that Satan-imitating Keith Raniere.

It is too trite to say that despite her loss, she gained something more precious – her daughter’s life.

It is not a quid pro quo. This was not a fire sacrifice. But I think it is striking that only Ganesh survived.

Overall, it was a tough – and, at the same time, a very good year-and-a-half – for Catherine Oxenberg.

Way to go Ganesh! And Catherine too.