Reliable sources told me about Allison punishing DOS women via bare-ass paddling.  I was told by reliable sources in 2015, Allison was having threesomes and foursomes with Raniere and that herpes had erupted in the harem. I was told that Allison had herself checked for herpes.

The DOJ in their indictment alleged an incident where a DOS Slave [Jane Doe #1] was ordered by Allison to do anything Raniere wanted.  Jane went to him late at night and he blindfolded her and led her to a shack and ordered her to strip naked, 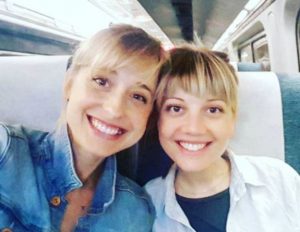 Allison Mack married Nicki Clyne, both were members of DOS.

We know Allison claims to have originated the idea of branding naked women on their public region. Sources say she enjoyed being called “Madam” and that several called her “Pimp Mack.”

This might put a new construction on the sex trafficking charges.

Who knows?  It may crop up in a superseding indictment which some expect to come out within the next 60 days.