And while it is fine that the editors saw fit to name NXIVM in their headline, they were shockingly rude to the cult leader who branded some 150 women with his initials – by not including either his name or his photograph on the cover.

Keith Alan Raniere AKA Vanguard just isn’t getting the respect he deserves.

On the other hand, Raniere was a just an obscure cult leader until Frank Report broke his branding story in June 2017 – which cratered his cult and which was followed up on – attracting a worldwide audience and FBI interest – by the NY Times in October 2017.

In fact, People Magazine credited Frank Report and this writer for having “written more than 1,700 critical posts about Nxivm and Raniere on his website“.

People went on to say that “Parlato, who has developed a large network of Nxivm sources over the years, was the first person to report about the alleged branding of female members and wrote that [Allison] Mack’s arrest was imminent days before it happened.”

So, I can humbly take some pride in helping to accomplish what Keith Raniere initially hired me to do – which was to help get his name out there.

And happily, today, Raniere is named alongside such notable cult leaders as Manson, Applewhite, Bhagwan Shree Rajneesh, and David Koresh.

He”s made the big time.

On top of that, People published 23 stories on his cult NXIVM since Raniere’s arrest on March 26, 2018.

Yet Raniere supporters might sense an underlying unfairness – if not outright sexism – in People’s coverage of NXIVM.

Of the 23 stories, the female Allison Mack is the lead picture of 14 of them [and they criticize Shadow State!]. Of the remaining 9 stories, Catherine Oxenberg is featured in four, Clare Bronfman in one and Sara Bronfman in another, Kristin Kreuk in one [don’t be upset Sultan], Nicki Clyne in one and Flowers, talk about sexism, it’s a woman in every single picture – the man that led them all – Keith Raniere is not the lead picture in a single People story.

Talk about a lack of respect.

I don’t remember a single Charles Manson cult story that failed to feature his wide-eyed, staring face.  Raniere is every bit as good looking as Manson and cross-eyed too.

I can just hear Raniere whining from his prison cell, “Allison is getting all the credit and I did all the work.”

But as the centuries roll on, Raniere is bound to get the credit he is due – and I firmly believe he will be in Tussaud’s Wax Gallery in the Chamber of Horrors – alongside Jack the Ripper, Bluebeard and other notorious criminals remembered for the ages.

Supporters of Raniere can take some consolation in that on People’s web page advertising their publication on cults, they saw fit to use a picture of Raniere, but frankly, it is insultingly tiny. 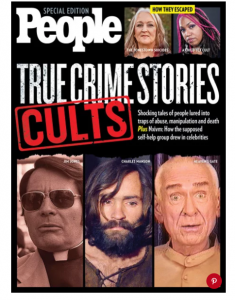 Here are the stories People has done to date on NXIVM.  Note how many of them are about Allison Mack [Kind of a vindication for Shadow State I might add].