By Shadow State 1958
Everyone wonders who Pea is and how he came to be.  I believe the answer lies in the timing of events.
In June 2017, the Frank Report became the first media outlet to expose the DOS cult and Allison Mack’s role in it with the branding and sex slavery.
NXIVM immediately went in a panic mode and battened down the hatches.  Mack was forbidden to talk to the media about the truthful rumors according to the DOS woman Jane.  Like the good German girl she is (ROTFL) Mack obeyed the order giving only one highly-controlled interview to the New York Times Magazine.
As a legal matter such silence is prudent.  As a Public Relations matter such silence only raises more and more questions.
Both Mack and her wife Nick? Clyne are media people allergic to media blackouts.  They wanted to get out in front and spin the story into what they saw as an acceptable narrative.
Mack was forbidden to talk to the media but Nicki Clyne was not.
Hence the Genesis of Pea Oñyu.
Mack spent much of the last half of 2017 traveling out of the country keeping a low profile.  As the situation started to spin out of control with the FBI starting an investigation, Pea Onyu made her first appearance. It was also at this time that Nicki Clyne appeared at a Halloween party dressed in a prisoner’s uniform. Nicki knew what was going down. 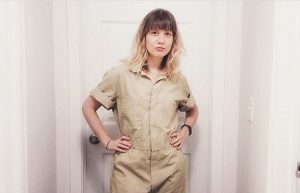 From time to time Pea let slip her ties to Nicki Clyne. Like when Pea starts mentioning how Vanguard had trained Iguanas to talk in Puerto Vallarta before he was arrested.  Like her spouse Allison, Nicki likes to perform for people and put on a show.
Nicki Clyne posted a picture from Puerto Vallarta with this caption: “nickiclyne, iguana wish you all a happy valentine’s day!?”
I have mentioned elsewhere my reasoning that Pea Onyu is indeed Ncki Clyne.  Who is Pea Onyu? Shadow State thinks it’s Nicki Clyne
The other day Pea made a comment  “Just remember my fine and highly critical fiends.”

The use of the word ‘fiends’ is similar to an earlier Nicki Clyne Instagram account where she posts under the name of Clicky Nine.

Pea is in all probability Nicki Clyne.