With lawyers like Marc Agnifilo, who needs a prosecutor?   Well, that’s not really fair.  Marc has a big job defending a crud like Keith Raniere and despite the money – Agnifilo is said to charge as much as $2,500 per hour – this guy is hard to like and harder to defend.

Still, some things Agnifilo said about Raniere would be – if he said them about me – cause to fire him.  But Raniere is a different kind of animal.

As an example, I loved this line in a CBC story:  “Agnifilo has experience representing men who claim to be brilliant but find themselves in a legal mess. He previously represented Martin Shkreli, the convicted securities fraudster who became an international pariah for hiking the price of a potentially life-saving drug by more than 5,000 percent.

“‘So this is probably my 10th client who is the smartest man in the world,’ Agnifilo says.”

That seems tantamount to him mocking Keith.  But Agnifilo redeems himself a little in the same article. Referring to Raniere, he says, “He’s very smart. He studies a great deal. He has a lot of ideas about his case. He’s adamant about his innocence. And I think that’s part of what animates him.”

Speaking of put-downs, Agnifilo also spoke about Raniere with Megan Kelly and famously called him “soft.”

He said, “I don’t know why anyone could feel that they’re physically threatened by Keith Raniere or anyone in NXIVM. Keith Raniere is a remarkably – he might get mad at me for saying it – soft man….  He’s just soft. He is not a big, strong masculine force. He just isn’t. He is pretty much the exact opposite. He is not physically imposing in the least.”

After he said that about me, I would have had to fire him. But then again Raniere is rather soft.

In any event, Agnifilo is a damn good lawyer and is persuasive.  He is not shy about speaking to the media and in a sense previewing the defense. That may have some advantages. 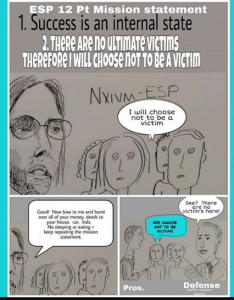 Agnifilo has made it clear he plans to challenge the prosecution’s claim that DOS women were victims.  Women were taught in  NXIVM that there are no ultimate victims.

“And people are now saying, ‘Well, I was manipulated,'” Agnifilo said incredulously. “Wow. I mean, to sort of say that I was exposed to these concepts and somehow I was manipulated or coerced. Man, you’re going to have to prove that to me because I don’t see it.”

Agnifilo told CBC:  “I don’t think there’s such thing as brainwashing. It went out with the Cold War. It’s like a relic of the ’70s. I mean, it just doesn’t exist….  It’s a self-help group. It’s a group that preaches a pretty fundamental idea … there are no victims.

“The NXIVM philosophy… is just take victimhood out of the equation. Everything in your life is something that you chose. I’m talking about people who live in first-world countries who have choices and economic opportunity.”

RANIERE DID NOT RUN DOS

Agnifilo also argues that “Keith is not the leader of DOS. DOS doesn’t really have a leader in that sense. It is not a corporate structure.”

No he says, Raniere did not run DOS.  “Women ran DOS….  they made their own choices…. They voluntarily handed over potentially life-ruining material — to other women – not to Raniere – to demonstrate their commitment. And they chose to brand themselves.”

Agnifilo said he spoke with a dozen members of DOS and “they say it’s the greatest thing they ever did.”

He told Megan Kelly that NXIVM and DOS are “two separate things.” The women of DOS “were called masters and slaves. That’s what the women wanted to call them. DOS is a sorority, a group of women and it’s only women. The women of DOS had decided is ‘We’re going to have this group of women and we’re going have some extreme protocols. Admittedly. We are going to – some of us are going to brand ourselves. Absolutely, 100 percent voluntarily.”

Agnifilo told the New York Times, “A lot of adult, strong-minded, free-willed women made decisions for their own lives.”

As for collateral, Agnifilo admits Keith held onto a little bit of it. I suppose he might have had to admit it since the government likely seized it from Raniere’s sex lair when they raided it.

Agnifilo said, “Some of [the collateral] went to Keith. I think most of it was retained by the woman master who brought the person in. …. Keith did not see the vast majority of it. But collateral is a very common principle in NXIVM. The whole kind of concept behind NXIVM is promises matter.”

Agnifilo added, “Let’s live in reality. Let’s stop living in where ‘I’m afraid’, ‘I think’, ‘this might.”, Let’s live in what actually happened. No collateral has been released. Period….  Keith never threatened anybody about anything and I defy any witness to get on the witness stand and say otherwise.”

NO ONE FORCED TO HAVE SEX WITH VANGUARD

As for the crime of sex trafficking, Agnifilo told Dateline, it is “not true on every conceivable level.”

He also said that no women were made to have sex with Raniere.  “It is all nonsense. These are choices that adult, smart, educated women are making. I don’t buy brainwashing. If that is the government’s theory, they are going to lose.”

Agnifilo told CBC: “Keith would go on long walks with these women. He’d hold hands with these women. He would lay down in a bed and she would put her hand on Keith’s heart and he would put his hand on her heart. And that is the totality of the conduct. So how this got transformed into a sex cult, I’ll never know…. If they’re saying that they were coerced to have sex with Keith, I’m saying they’re lying.”

It’s just a warm and gentle group, Agnifilo said: “Some of the women who were in DOS felt that they had issues with intimacy during sex. And that they felt that they could be intimate with Keith. …  Keith is about human connection…. this is more of a cuddle cult than it is a sex cult.”

SOME EX MEMBERS REALLY WANTED TO STEAL THE TECH

Agnifilo points out that the government’s case is sexist. Men have joined secret societies for centuries. But when women have a secret group, “all of a sudden we’re quick to say, ‘Oh, poor dears. They must be victims because no right-thinking, free-willed woman would ever want that for herself.'”

Agnifilo told NBC’s “Dateline “Talk to all the football players who have a branding on their arm. Are they all in cults? You know what the difference is? They’re men…  women brand themselves and they’re poor little dears and they’re victims. When men do it, they’re Marines…. I’m not sure how the men were branded and you know why? Because we’ve never bothered to ask. Because they’re men..” 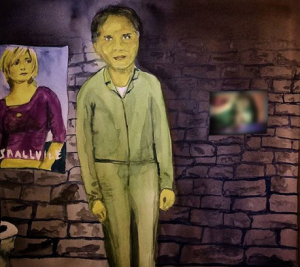 “The government wants to give Keith Raniere life in prison….. That’s what they think a fair resolution of this case would be, that he would get life in prison for this. And so for Keith, everything. I mean, his very livelihood, his life is at stake.