Let there be no doubt in your minds that what we are seeing, what the Democrat “leaders” ALL want, what Barack Obama tried to do for eight years, what Bernie Sanders wants, what Hillary Clinton planned on doing, what Maxine Waters, Chuck Schumer, Booker, Ellison, Pelosi all incite rioters to do, is to make America a SOCIALIST nation, doing away with your Constitutional Republic.  It is funded substantially by George Soros, a Hungarian citizen with dual citizenship with the US. Soros’s US citizenship should be revoked for his treasonous acts against America and for violating the oath he had to take to become a US citizen.

Soros almost succeeded in “changing” America, maybe not to the type of socialism Soros wants, but Islam is a step, a giant step in the direction Soros and the rest want. With Obama as his string puppet and Soros’s great wealth, he almost succeeded in destroying our Republic. We are feeling the carryover from Obama/Soros and the continuation of inciting chaos, protesting, and violence. Howdy Doody [Obama] is still dancing on the strings to get what he wants, an Islamic socialist country. You know, if you think about it, he does look a lot like Howdy Doody, doesn’t he?! 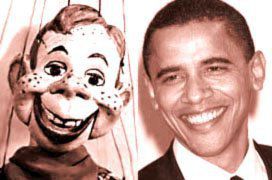 Obama tried to bankrupt America; read Cloward and Pivens book on how to break America! These Columbia “educators” taught that the way to ruin the country, that gave them their education and prosperity, is to “overload the social programs”, and make America weak, bankrupt her!  That is what this is about and if the “Democrap” leaders have their way with the Midterms, they will get their way.

You must vote to keep your Constitution in order to keep what you have!

In a Socialist society, there is virtually no middle class, that’s you and me. Have you noticed that mainstream Democrats have been quiet? They have no voice. Their leaders ignore them! In my opinion, the mainstream Democrats do not want socialism. In a Socialist America, there are two classes of people – the elite and the poor. In Socialism, only the wealthy, oligarchs own property. What are you? Every one of the Democrat leaders is an elitist; even dumbbell Maxine Waters has used her position to gain wealth. How did she buy a $3 million dollar house on a $170,000 salary? I submit: The same way Obama went in with a $400,000 net worth and eight years later, left with a $10 million net worth?! Just like Hillary stealing White House silverware and antiques when she left –lying, cheating, stealing is the way “Democrap” leaders work; the mainstream, Constitutional Republic Democrats are not like that and I am very hopeful they show that in the midterms!

Ask yourself this; “Who has been calling for disruption, the Democrat leaders or the Republican leaders”? Who said, ”Get in their faces at the restaurants, at work, every place you see them” and yet, when she was confronted in the halls of her office, she said ,”Go to my office, this isn’t proper”? Unbelievable…!

In my opinion, Soros has been pulling Howdy Doody’s strings and certainly keeping the strings “oiled”. Obama NEVER cared about the uninsured, the black citizens, or the whites. His allegiance has always been to Allah. It’s continues today. The disruption at all levels is coming from Obama and his troop of paid agitators. It is an illegal act to urge people to riot even if it starts off without violence. Why haven’t these rioters and arsonists been arrested and tried? Follow the money…it will lead to Soros! C’mon Sessions, you’re supposed to enforce the freaking laws, just do it!!! The Constitution allows for peaceful assembly. When organized agitators show up with identical black garb with hoods and masks, carrying commercially made signs, and uniformly turn violent, it’s illegal and they and their organizers should be arrested and charged!

“Why do the elites want a Socialist country”, you may ask. It’s because they can’t make it on their own, using their brains and energy. They were raised as Community Organizers and similar employs, but they want you to do what they tell you to do and live by the rights they grant as the ruling party.

They can’t win without lying and cheating. Hillary couldn’t pass her bar exam on her own, or attend a debate without having the answers, she even bought the DNC and still couldn’t win! Obama had Republicans targeted by his IRS. Lois Lerner had reporters and other US citizens wiretapped by his black ops lead by Brennan and Clapper. Do you think a low level NSA or CIA employee would illegally intercept any communication without the boss’ orders. Get real, just like a low level agent like me knows you can’t do that without risking everything, they too know that! Brennan and Clapper HAD to be involved.

It’s time for the mainstream Democrats to take a stand for their Constitution or they won’t have one! Just remember that it is our Constitution and Rule of Law that keeps you safe. Did you feel safe with Obama and Eric Holder?

J. Gary Dilaura, a 28 year veteran of the FBI, spent his career in South Carolina, the New York Office, and Buffalo. Active in the FBI’s Violent Crimes Program, finishing his career as Bank Robbery Supervisor. He received Commendations from every FBI Director he worked for and after retiring he became a Businessman and Conservative, OpEd Columnist, "The Right Side", for several publications including, the Niagara Falls Reporter and the Ft Myers, Sun bay Paper. Visit his website at therightsidejgarydilaura.com .

THE PRESIDENT AND “PLENARY POWER”…WHAT IS IT?
Does Robert Mueller want to tangle with Roger Stone?
Comment