I think the entire motion to seal and shield the potential guarantors on Keith Raniere’s bond is ridiculous. There is no precedent for a guarantor on a bond to remain anonymous, close the bond hearing, or shield the guarantors from scrutiny.

Keith has painted himself into a corner. Because if you claim to have zero assets,

1) how do explain $8 Million in your bank account and

2) how does it harm you if you post a bond then jump bail and skip town? It doesn’t, because it is not your money.

It appears Clare is trying to set up strawmen to post the bond for Keith. If their identities are revealed, there are enough of us to investigate and follow the money trail.

I think the big factor will be Keith’s behavior prior to his arrest. Fleeing to Mexico. Living it up in a $10,000 a week villa with his girlfriends, changing his electronic trail so as not to be tracked.

If anything, the motion will bring more readers to the Frank Report. I really hope the NY Post covers it. That will bring more traffic and visibility. Plus, it brings more attention to the sham case against Frank. So, hopefully the added community outcry will help to convince the US Attorneys Office to drop Frank’s case….

I particularly like the Gov’t response on Raniere’s motion to close the courtroom.  It is quite funny. I like that last line at the end:
“Even if the Court were to credit these claims, they do not provide a sufficient basis for the Court to make specific findings that there is a ‘substantial probability of prejudice to a compelling interest’ of any party; the defendant alleges only generalized fears of negative media attention, including in a blog critical of Nxivm, whose author publicly admits to writing ‘fictional stories’ to make the defendant ‘look ridiculous, Def. Mot at 6 n.6. 1.”
Hahahaha! I don’t think VanGrifter needs any further help to look ridiculous. He and his flying monkeys are doing fine all on their own.
I totally agree. No reason for Judge to grant it or grant bail….
In the end, I think Keith painted himself into a corner – since he claimed zero assets. And now these mysterious benefactors (Clare and Sara) want to post his bail. What incentive does Keith have to comply with the bail conditions if none of the money is his?
None. He can walk and it won’t hurt him at all.
And even with electronic monitoring. He can cut the ankle monitor, step on a boat. Head to Canada, take a private jet. There are so many ways to engineer an escape.
Fake fire. Fake heart attack, escape at hospital.
So, I think Judge will deny.
My prediction: Trial next year. Raniere guilty on nearly all counts. Will spend life in SuperMax.  And he’s kind of creepy. Put him in front of a jury. Forget about it.
If I were his attorney, I would never let him testify. Because now he’s been labeled as a David Koresh-like messianic figure. And we know what happened at Waco. But stupid Keith is so ego driven, he will want to testify and he’ll get dusted by the AUSAs.
My two cents… 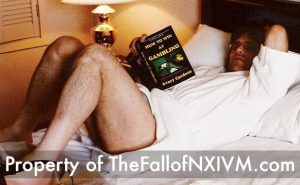 Speaking of ridiculous, this is a writer’s embellishment of what I can well imagine Keith Raniere telling his lawyers:
“Frank Parlato never gets that information. That identity of the guarantors for my bail bond is perfect for him; it’ll make him a big blogger and I’m gonna run him out of the internet – and let me tell you why: Frank Parlato ruined one of Vanguard’s most valuable secret organizations. For three years, I was branding women  – giving a-cappella singing lessons, the Source acting lessons, Jness women’s lessons, the Knife Media – to lure them in. I spent millions of Bronfman dollars, I was gonna make a thousand women branded. And let me be even more frank, just to show you that I’m not a hard-hearted man, and that it’s not all about blackmail and enslavement: the women were beautiful; they were young; they were skinny. They were the best pieces of ass I’ve ever had, and I’ve had ’em all over Clifton Park. And then Frank Parlato comes along with his olive oil voice and guinea writing style and breaks up the cult. The Jane Does threw it all away just to make me look ridiculous! And a Vanguard, especially one who’s heading up a sex-slaver cult, can’t afford to be made to look ridiculous!

Will Diamond; James Del Negro raped my girlfriend
Government responds to Raniere’s motion to seal and close the courtroom so his friends can secretly post bail for him
Comment