Some readers are not so sure Kristin Kreuk was not more deeply involved in NXIVM than she admits.

KK is a coward

Kristin Kreuk basically admits to being a coward in her New Culture Revolution blog she started with Sima Kumar, her stylist she recruited into NXIVM.

“If you were to be privy to what went on inside my head for 24 hours you would see that there are at least a dozen times a day where I hold back from saying or expressing something that may be uncomfortable. That may trigger a reaction, that may be unpopular or distasteful. I shy away from the hard stuff. I look for easiness. This is not something I am proud of. And this is something I am actively working to change. This makes me easily pliable and causes whatever it is I want to stand for to be ineffectual and watered down. And truly means I don’t stand for anything but being wishy-washy and afraid.”

All her 2017 virtue signalling about “women’s rights” and “patriarchy” in 2017 while being silent on NXIVM means she is still “wishy-washy”.

Also, on her old Instagram page, dated August 12th 2016, she essentially moans that she is not as famous as she wishes she was and admits to being fearful, insecure and needing external sources of validation. She posts a picture of a feminist book and a link to a feminist TED talk from the author. Kreuk does not care about “women’s rights”. 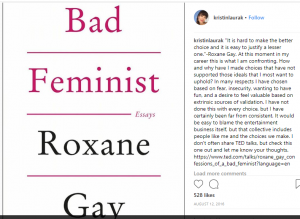 Members in NXIVM that were further along the ladder/sash path were ordered to create Ethical business based upon Vanguard’s teachings.

GBD was Kreuk’s business and she took it to Nancy Salzman for approval. Girls By Design was supposed to be about young woman female empowerment. It also had leadership retreats and meetings in Kreuk’s home.

Leadership retreats for teen girls based on ethical teachings – does that sound familiar? Duh. VanGrifter’s MO.

As for her recruitment drive, KK personally recruited Kendra Voth, Allison Mack, Sima Kumar, Suzanne Gomez, Rose Bhura, and a bunch of others.

But Kreuk HAD.NO.IDEA. that anything nefarious was going on (her statement, but who uses nefarious in a sentence?).

Kristin Kreuk was named in the same Times Union expose (Feb 2012) where her beloved Keith Raniere’s child pedophilia victims came forward revealing how they were raped by him as children. Kreuk was STILL an active member of the cult after that, coaching in Albany and LA and was still pro-NXIVM in 2015.

Read what this former participant of Girls By Design has to say about it:

“I was a part of GBD in 2008 when I was 17 years old. KK would have girls fill out questionnaires (usually open ended questions about your experience as a teen) on Facebook, and Kendra would contact us privately if we said something that interested her. Here’s one thing I do remember– it seemed Kristen and Kendra were more interested in recruiting girls much younger in age than me, closer to middle school. I ended up leaving GBD because of that. I also remember them both posting numerous vlogs on YouTube.

I do remember at one point Kendra was much more interactive with having one on one’s with individual girls than KK was. I remember thinking that perhaps GBD was Kendra’s thing and KK was there to generate attention (at least she didn’t seem to want to get her hands dirty).

Not sure if that information is useful, but I wanted to put it out there.”

Article can be found here:

Freaked out by Kreuk

NXIVM people were encouraged to create NXIVM projects and Kristin Kreuk and Kendra Voth did this. Tabby Chapman, a Smallville superfan who was recruited into NXIVM by Ally Wack was involved. As was [name redacted], another NXIVM member. A former NXIVM member on this site said his(?) production company filmed the GBD videos in Thailand but the crew were freaked out by Kristin Kreuk because of her culty behavior. 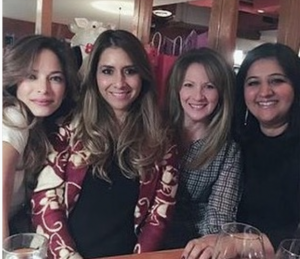 From left: Kreuk, Suzanne Gomez (her CW Publicist), Kendra Voth (who she met on CW Network show Smallville) and Rose Bhura. Kristin Kreuk and Rose Bhura did a short film together called “Blink” where lots of NXIVM people were involved, including obviously Kreuk and Bhura, Mark Hildreth and Tony Dean Smith.

Kristin Kreuk has retweeted something to her Twitter page about this so called “Red Dress Project”, which is about missing and murdered indigenous women and girls… despite the fact most missing indigenous people are males and most of the murdered were murdered by male Native Indians. Kreuk still pretending to care about “causes” she does not care about or have any connection to, that doesn’t require any sacrifice on her part, while arrogantly remaining silent on NXIVM. Thats nice.

No mention of Kristin Snyder eh Kristin? Her body has never been found.

No mention of the women who came forward in February 2012 revealing they were raped by your beloved Keith Raniere when they were young children. Kreuk was named in that same expose and she was STILL coaching in Albany and LA as if nothing happened and was STILL supporting Keith Raniere in 2015.

Kreuk has not done anything for the many branded sex slaves of Keith Raniere.

Still no criticism of Allison Mack (who she recruited), Keith Raniere, her beloved Nancy Salzman, the Bronfmans etc.

Give it a fucking rest with all this pretentious virtue signalling Kristin. You have zero morals. You attach yourself to posting shit on social media about things that have nothing to do with you yet remain arrogantly silent on NXIVM, a thing you were deeply involved with and have a lot to answer for… and you know it.

When the video shows a sample of the survey, it shows a page of questions about spending habits, asking the participant to check off boxes showing how much they spend on things like clothes, toiletries, transportation, etc. So the survey can provide a list of young impressionable college kids WITH money. NXIVM has no interest in broke college students (or broke ANYONE, for that matter).

The other questions could be posed in a way to be able to discern if a young person is susceptible to being sucked into NXIVM.

And NXIVM could end up with a targeted list culled from hundreds if not thousands of young people, with which they could target those who would be most likely to have the money and the personality to join NXIVM.

Oh and when the interviewer asks KK and AM if they are in Vancouver, they reply that they are in New York.

Betcha they weren’t talking about NYC.

This survey is some dark shit.

Kook needs to explain herself.

I was a Smaville fan and remember the Girls By Design thing. It seemed a bit odd at the time and now it makes sense (it was a lot odd).

Don’t you people get that these women Mack Kruek and Clyne are/were role models for young girls for years. I will do anything in my power to prevent our daughters and granddaughters from watching anything they put out there.

It was a NXIVM recruitment tool fronted by Kristin Kreuk and Allison Mack to lure in so-called “artists” to the cult. Allison Mack posted a blog post to her website saying they were having problems getting it patented.

Both Kristin Kreuk and Allison Mack, along with Sarah Edmondson and Nicki Clyne fronted the College Project to lure in college teens into NXIVM.

Kreuk and Mack, being the most famous were the main faces for it. They promoted a survey, essentially a NXIVM market research survey for Keith Raniere, all on false pretenses. They were planning to build a website to lure in college kids. The survey was hosted by etholutions.com, which was registered to Karen Unterreiner, the notorious pimp.

KK was deep in NXIVM

[KK] did not just attend courses and recruit. She coached. She coached in Vancouver, Albany, Tacoma and Los Angeles. She worked for NXIVM….

Kreuk was deep in NXIVM. Allison Mack was not any deeper in than Kreuk. You think Allison Mack only went off the rails after Kreuk claims she left in 2013?