It was mentioned that Rosa Laura Junco had been removed – or removed herself – from the Knife Media website. She has not tweeted since May 15, 2018.  Take this for what it is worth – but I was told that she is not in the USA and is in Mexico.

Only a housekeeper remains at her mansion on Englemore.  My recent drive-bys confirm that the same vehicle has sat parked in the same spot for some time. The mansion looks pretty empty.

it is unknown if her husband, and longtime NXIVM member Luis Montes and Rosa Laura actually split up.

My source felt that Luis was quite happy with his sugar mama Rosa Laura and didn’t mind being led like a dog on a leash. But hey, even dogs bite when mistreated.

Edgar Boone – the pioneer of the Mexican recruitment activities and its associated money laundering activities – and his family appear to be back in town. I have seen an Audi SUV and an AUDI sedan convertible at various times of the day in the driveway.  I have not seen Edgar however.
Ivy Nevares – the longtime Keith Raniere harem member – who he told to never cut her hair – and it became so long that it grew past her feet- is no longer in the 518 {Albany area] .
I do not know if she is out of NXIVM ( I would think not because she is still listed as working for the Knife Media) but she is reported to have moved south and may be in Florida. Someone once mentioned she had an aunt and uncle who were trying to extract her from the cult. Maybe she went there. She may also have cut her hair.
Kerstin Ohlander, who works for the Knife, is now the inhabitant of #1 Flintlock [the former residence of Kristin Keefe and two doors down from where Keith, Mariana Fernandez and Pam Cafritz lived menage a trois].

Kerstin was spotted with Nancy Salzman the other day, just prior to Nancy being arrested. 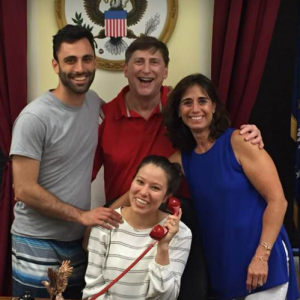 So, either the info was wrong about Justin leaving (and he has not been seen in some time, nor have any of the Elliott brothers in Clifton Park) or it is true – and possibly Samantha is out too.  It appears they are dating.  Justin is bisexual from what I recall being mentioned in a comment.

Finally, it seems Dani Padilla is not coming back to Clifton Park either for her house is up for sale – and evidently there is a contract on the property: 8 Raleigh Drive is listed as a “Pending Sale.”

https://www.estately.com/listings/info/8-raleigh-dr
She has been spotted by our Mexican correspondents back at her family estate in Mexico.