Laura Darby’s last report suggests that NXIVM members such as Nancy and Lauren Salzman, Karen Unterreiner,  Edgar Boone, etc. – the people who were so intently involved for so long in the high crimes of their leader, Keith Alan Raniere – are well aware that the end of their reign of terror has come.

It is now their turn to be terrified.

Meanwhile, more rank and file members are beginning to wake up and leave. I just received word that Justin Elliot has left NXIVM – and I’m awaiting word on whether the other two Elliot brothers are leaving or have left.

Adrian Fluffy Fernandez has left, along with Chelsea. DOS slave Jacqueline Ronay may have left the inglorious fold.

Some of those who are leaving are turning over evidence and are going to testify for the Feds.  The Elliot brothers all testified before the grand jury. I hope their testimony was truthful. Unlike the wealthy Clare Bronfman – who lied before the grand jury in the Western District of NY in my case and was not charged with perjury (She also perjured herself in several other cases — including, but lot limited to, civil lawsuits against Joe O’Hara, Toni Natalie, Jim Odato. The Times Union, Suzanne Andrews. Vanity Fair, Rick Ross, Yuri Plyam, and Barbara Bouchey and in criminal complaints against, Joe O’Hara, Toni Natalie, John Tighe and Sarah Edmondson).

In the Eastern District of New York, they may not tolerate lying – especially from people who are not wealthy.  Unlike the rich in America, poor people ought not to lie in the grand jury – for they will be prosecuted. And the Elliott brothers  – mainly because they were longtime members of Executive Success – are poor.

As for Jackie Ronay – not only was she a DOS slave, but she was the girlfriend of longtime member Michel “Cuckie” Chernitzy and the sometimes secret lover of Emiliano “Puto” Salinas – who, it has oft been said, would  be “every woman’s husband and every man’s wife”, if he could.

I will try to post the list of remaining members soon – that last of the once powerful crew who plan to go down with the ship – or those who are already sunk and they know it. Some of these are trying to cut deals with the Feds but are finding that they may have waited too late.

Yes, these are stark times for the Raniere crowd . And they are beginning to learn just what Vanguard really meant to them and how the NXIVM “tech” of Executive Success Programs really works.

As the list of defectors grow, I think it’s interesting that some of the remaining and staunch NXIVM members are seemingly unaware of who is defecting and unaware that some are acting as spies on them and other members.

This is ironic – for in Raniere’s day, some of the members felt the same way – about Keith and the other High Rank. That is to say that in Raniere’s Orwellian world of NXIVM, members spied on each other and reported to Raniere or Salzman. Many who thought of leaving were fearful about who to confide in.

Now, they are spying on each other, but it is the ones who want to stay in NXIVM who are fearful [not the ones who are leaving] – that some of their fellow members are spying on them and reporting [but not to Nancy or Keith but] to the feds.

No one is safe in NXIVM any longer.

Longtime members and old friends – slaves of Raniere and old guard harem members – are, or soon will be, “ratting” each other out.  Are you listening Kathy Russell? 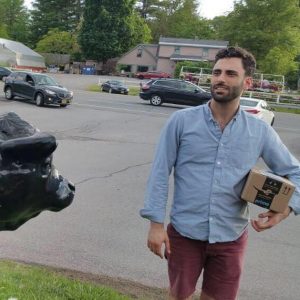 Justin Elliot – one of the boy ‘fuck toys’ of NXIVM High Rank Alejandro Betancourt – is seen carrying a package from one of many PO boxes used by NXIVM and its numerous shell companies – where they received illegal and unreported payments.

Justin made trips back and forth to Mexico [Not unlike how Christine Collins-Morganstein made trips to Guatemala] and it is believed Justin did more than provide sexual slavery services for Betancourt in Mexico – along with young boys.

Justin may also have participated in NXIVM’s wide scale cash smuggling operations.  Now that he is out of NXIVM, Justin may become a prime witness in the case against the Bronfman-Raniere-Salinas international crime cartel.

Stay tuned. The defections will be of primary interest, along with the impending indictments. This is a show you will not want to miss.