US Senator Kirsten Gillibrand [D-NY] has a well known and powerful political father from the state capitol, Albany, New York. His name is Doug Rutnik. What is not widely known is that Doug worked for the sex slaver cult of NXIVM — about a dozen years ago.

NXIVM hired Doug as a consultant for $25,000 a month. Among his duties was to have weekly dinners with NXIVM president Nancy Salzman. At the time, NXIVM leader Keith Raniere was interested in securing indictments against former girlfriend, Toni Natalie and cult de-programmer, Rick Ross. Doug was unsuccessful in serving up the indictments Raniere craved.
During the four months he was consulting for NXIVM, Doug introduced his younger [second] cousin, Gwen Bellcourt, an attorney, to the cult.  Doug initially asked Gwenn to take a 5-day intensive to determine if NXVIM needed a license as an educational institution.  Being bright, attractive and ambitious, Gwenn was targeted by Raniere for inclusion in the high rank of the cult.  Salzman, a master hypnotist, spent an enormous amount of time with Gwenn. Raniere wanted her to become NXIVM’s inside attorney.
After the first course, she became enamored with NXIVM. She took another 5 -day course, then another. As soon as Gwenn was indoctrinated into the cult, Raniere decided they no longer needed Rutnik.  Nancy claimed Doug sexually harassed her. Raniere demanded Doug pay the entire four months of payments back. He refused. NXIVM sued him, threatening to ruin his reputation by exposing the scandal in court filings which are public record.  Doug paid NXIVM $100,000 as per the terms of an out-of-court settlement.  He and NXIVM signed a confidentiality agreement promising never to reveal the agreement. (Someone leaked the agreement.} 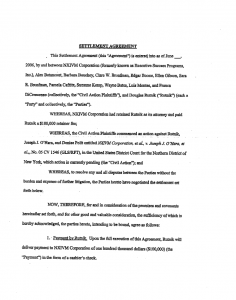 A Match Made in NXIVM
Meantime, Doug discovered his cousin, Gwenn, was deeply immersed, spending lots of money on what some believe are nothing more than brainwashing courses. She was engaged to be married when she first started taking NXIVM courses.
Part of the NXIVM curriculum is for women to list all the advantages of having her partner suddenly die. Gwenn soon realized that her engagement was a sham. She belonged with NXIVM – born to be free and single – so she could learn all they could teach. She ended her engagement and signed up for more classes.
A lifelong politico, Doug had decades of brokering backroom deals. He decided to work behind the scenes to get his cousin out of NXIVM. She did not want to leave. She loved NXIVM. They loved her. She declared Keith was wonderful and Nancy was like a second mother.
Doug was determined. He felt a flush of something new and noble inside him. His heart quickened; his pulse raced; his gate accelerated, as he contrived to meet Gwenn on any pretext – to get her out of the cult.
He was dapper, a handsome older man –wise and urbane. Though she was an attorney, she was just putty in NXIVM’s hands.
It didn’t take long for Gwenn to realize she had competing interests – the love bombing of the NXIVM community – the mentorship of lovely Nancy and occasional glimpses of Keith himself – who they called Vanguard – versus an attentive, wealthy, sophisticated, powerful older cousin who she had always admired and who had suddenly become her best friend.
There was more:  Keith, after all, if she were to rise in NXIVM, would demand her complete sexual fidelity to him – and she would be one of his harem. Her cousin – no, he was not only her cousin – he was a man too – – was openly trying to get her away from Keith.  No – she had to stop thinking about it.  She dare not say it – even to Prefect Nancy – in an exploration of meaning therapy [that some say is a NXIVM technique to get blackmail material on members.]  It was wrong in the eyes of the world to think of her older cousin as a man. But then again, what Keith wanted was equally scandalous. He taught that all sexual mores rules – even laws about sex were society’s contrivances, designed to keep people from experiencing joy.
At first, for Doug, it was a challenge, and revenge for being treated so badly by the cult. But months of trying to rescue her, had put her foremost in his mind. And for Gwenn, his solicitude and caring about her – put him again and again in her mind.
Then one night perhaps he held her hand – as an older cousin – giving her advice, but instead of removing his hand, he kept it a moment longer than should a cousin, and she too did not pull away. It was moment passing sweet and tender.
Then perhaps one night when he kissed her goodnight, and held her in his arms – instead of a kiss on the cheek, – their eyes met then their lips.  Doug turned and left – no longer a cousin.  He was a man in her eyes.
Doug had kissed many women. A kiss was nothing. He had no right to kiss her that way. But, if he could get Gwenn away from NXIVM, he would kiss her again.
All night long, Gwenn’s thoughts were mostly on Doug and not so much on her Vanguard or Prefect.
Still, she was torn. Gradually it came over both of them this realization of how much they had grown to mean to one another. Doug had morphed from concerned cousin to a man with evident amorous intentions.  Yet Doug was insistent as he was ardent. She must break away from NXIVM. Would she marry him? Yes, if she left. She agreed. Doug got her out. She told Prefect who told Vanguard.
Another one escaped – because of romance, Vanguard no doubt opined. Prefect likely argued that she should have known better to try to find joy in a some monogamous relationship. And maybe Vanguard waxed philosophic, “Knowing what to do is useless without the emotional strength to do what you know.”
In any event, Doug Rutnik did what few were ever successful in doing – he successfully de-programmed Gwenn and married her too and they lived happily ever after without Prefect or even Vanguard or Gwenn getting branded.
The end.
***
Now fast forward to November, 2017, about a month after the New York Times and other media outlets reported on NXIVM – as the secretive cult that brands women.
When asked by columnist Richard Johnson for Page Six, if she knew anything about NXIVM, US Senator Kirsten Gillibrand, through a spokesman, answered she “never heard of this group until she recently read about them in the newspaper.”

I began to consider if this could be true. NXIVM is located in Albany, Gillibrand’s hometown. Almost everybody in Albany knew about NXIVM. The cult was featured in scores of front page stories in the Albany Times Union – since 2003.  If Gillibrand can read – and I am told she can –  how could she have missed 15 years of Times Union stories?

On top of that, her father Doug Rutnik- as related above – worked for NXIVM, wound up being sued by them and paid $100,000 as settlement. And on top of that, Kirsten’s cousin [now stepmother] Gwenn was involved in the cult and her father went through a lot of effort to rescue her; it sparked their romance and marriage.

But Kirsten says she never heard of NXIVM.

With that ability to lie, Kristen probably thinks she’ll make a great president – for there are no people like the Americans who love so much to be lied to by their leaders.  It is the one land on earth where lying is not a disqualification for any office however exalted.  In this, one sees a consonance with the teachings of the Vanguard and his embracing of the Luciferian or sociopath – as the best leader for our sheeple – such as he is himself.

Nice going, Kirsten – tho your father and stepmother got out – you learned the greatest lesson of the Vanguard – even if inadvertently – all too well.  I mean how would it have hurt you to make the candid admission – my father once worked there and found it evil and left and took my stepmother out with him?

No Kirsten  had to lie. She never heard of them – not until she read about them in the newspaper recently – she said, her nose waxing larger each time she said it. It is a ponderous nose.