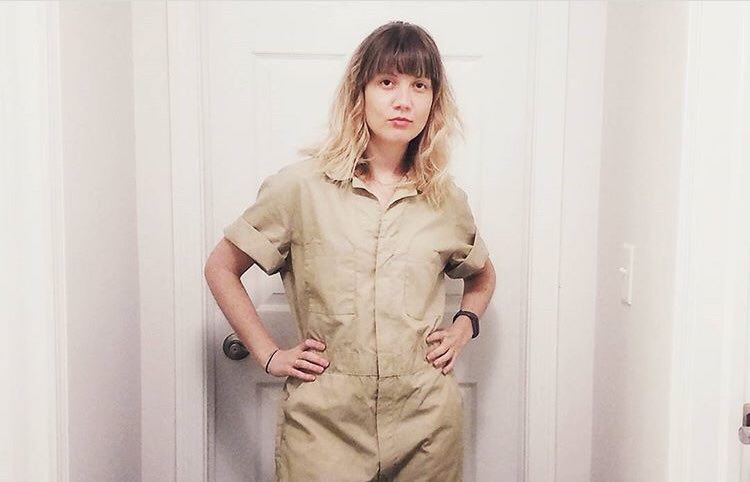 Nicki Clyne in a brown jumpsuit [not photo-shopped]
Nicki Clyne sent the photo above out on social media. It looks not unlike prison garb. Prison is where Nicki Clyne – the former Battlestar Gallactica actress – may be headed.
Recently, Nicki married Allison Mack, I believe, in order to remain in the USA [She is Canadian].
The Feds – who charged her spouse Allison with sex trafficking and forced labor – might like to trace how Seagram’s heiress Clare Bronfman paid Nicki before she got married to Allison via laundering money from the USA to Canada to Clyne at a pay rate of $15 per hour.
A beautiful and talented actress, Clyne got into cult leader Keith Raniere’s clutches and became a branded slave of the alleged crime cult.
Her marriage to Allison is likely an illegal fake marriage and her work to recruit other women might put her in the hot seat next to Allison.
The conditions of Allison Mack’s $5 million bail includes that she not speak to anyone connected to NXIVM except through her lawyers.
Nicki is also her spouse. The supposition is that Allison and Nicki cannot communicate – except through back channels – if at all. But the smart money is on the bet that Allison has defected and hence is no longer in the sex-slaver cult as her lawyers try to work out a plea deal for her – which will undoubtedly include testifying against her former slave master Keith Raniere.
According to sources, Nicki is working at Plantmade Cafe on 2nd St. in New York City eking out a modest living and, with Allison gone, running the slaves pods Allison once controlled.  It is not known if Plantmade is being used as a front for the cult and a recruitment locale since many attractive women patronize the vegan-based eatery.
Seagram’s heiress Clare Bronfman is now in charge of the entire NXIVM operation. NXIVM members are said to be in mortal fear she may be arrested which would cripple NXIVM instantly since Bronfman runs the cult and funds the operations.
The fact is that NXIVM slaves have to be constantly commanded, which is a task Allison assumed until he was arrested.  While Clyne is good at managing the daily duties of the slaves, she is destitute and could not continue operations without Bronfman’s support.