File Under — “Circumventing Probable Cause”

Monday’s FBI raid of Trump attorney, Michael Cohen’s office, ostensibly the result of a referral by Special Prosecutor Robert Mueller, to the DOJ’s Southern District of New York, raises further eyebrows of an investigation poisoned from the outset, naturally running amok, and raising the specter of a hostile bureaucracy hell-bent on removing a president who is not from within the leagues of the faceless, Democrat-laden, federal bureaucracy.

From the outset, the Russia investigation was tainted, and so much of Mueller’s resulting seizures are “Fruit of the Poisonous Tree,” a concept in law that where evidence is obtained in violation of the Fourth Amendment, such as through an unreasonable search warrant, then that later discovered evidence which is gathered is inadmissible in court and cannot be used by the prosecution. (Fun fact: the Fourth Amendment was designed to protect against unreasonable searches and seizures, and that warrants must issue upon probable cause.)

Following the publication and declassification of Congressman Nunes’ bombshell memo, which summarized the FISA court abuses committed by the FBI, their Fourth Amendment violations by spying on American citizens, and the damning fact that the FISA surveillance warrants were predicated on a sensational and deliberately false “pee-dossier” financed by the Hillary Clinton campaign, the very application to spy on Carter Page, and later to commence the “Russia Probe,” was illegally commenced, and tainted.

Quite obviously, if Russian interference were a genuine concern of the FBI and the Obama administration, that investigation would have been initiated years ago. This investigation never should have begun, based upon deceiving the FISA court, and, ultimately, were it not for Hillary Clinton’s campaign commission of the debunked anti-Trump dossier, it likely would not have.

Had Mr.Trump lost, Russian interference, if indeed it were an interference that can honestly be said to warrant such an investigation as presently has been undertaken, would likely not have been investigated either, and would not be dominating the news cycle. It is reasonable to conclude that were it not for a sympathetic Executive in Barack Obama and the defeat of his preferred Democrat, federal resources and energy would not have been directed to investigate Hillary Clinton’s opponent and victor in 2016.

Indeed, this is the equivalent of a prosecutor privately paying a crony to lie to the police and say that she was kidnapped by one of the prosecutor’s private enemies. The police apply for a search and arrest warrant (without any meaningful corroboration) which is granted by the sleepy, prosecutor-friendly, and uninquisitive court. Then that enemy is arrested, his home is searched, and the police find evidence that the enemy’s best friend might have committed some crime, somewhere, having nothing to do with the subject of the search; the friend is likewise arrested, and the prosecutor pats himself on his own back, exclaiming that the damning evidence against the remote friend vindicates him, the prosecutor, and affirms the righteousness of his prosecution.

The Language of the Appointment of Mueller 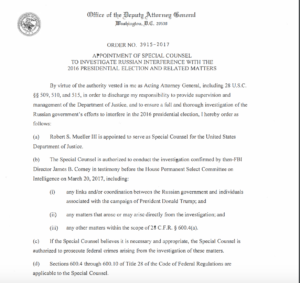 The very appointment of Robert Mueller is incredibly broad, and the language of Mueller’s appointment appears to have facially contemplated Mueller snooping into private, domestic affairs beyond the purview of the ill-founded Russian interference investigation. Deputy AG Rosenstein’s Order 3915-2017 appoints Mueller as special prosecutor to investigate the investigation confirmed by FBI Comey (a questionable investigator in the first instance) and

While clause 3 is problematic on its face given its potential breadth between Rosenstein and Mueller, the most troubling is clause 2, which reads, again, that Mueller may investigate “any matters that arose or may arise directly from the” Comey-initiated investigation. As to whether or not a matter arises “directly,” Mr. Mueller cannot be expected to interpret this narrowly; this is his bulldozer ticket.

Mr. Comey has demonstrated considerable enmity as of late to Mr. Trump, as has former CIA Director, John Brennan, another federal officer stated to have great integrity. Analyzing this subsection 2, this means practically anything that Mueller happens upon during his broad investigation into Mr. Trump, Russia, and Mr.Trump/Trump campaign + Russia,  and therefore, practically everyone Mr. Trump, his friends, his family, his businesses, and even his lawyers etc. know or ever met are potentially within Mueller’s purview; never mind any Russian connection.

Indeed, Paul Manafort’s indictment, while there is some alleged connection to the Russian government based on Pro-Russia lobbying work done in Ukraine unconnected to the Trump campaign, these activities, and the indictment itself bear no relation to Trump’s campaign. That indictment has generated from Mr. Mueller’s whim, based on the mere coincidence of past work done by Mr. Manafort for Russia, and an unconnected, later-Trump campaign.

The problem is that in our interconnected, cyber-dominated world, national boundaries are less apparent in the world of information or disinformation. Cyber theft and cyber security issues are not limited by the ability to physically travel. Then-FBI Director Comey stated on 60 minutes in 2014 that China was America’s biggest cyber-threat, and that hackers in that country have hacked every big U.S. company. It is ubiquitous that hackers from many countries commit offenses against the U.S., its government, companies, and citizens that are, by the very nature of 21st century global interconnection, connected with anyone and everyone from all countries across the planet via the worldwide web, including Russia. With such hostile, foreign actors aggressively targeting America’s private and public institutions, and a world interconnected,  the appointment to investigate Russian election interference might as well have been as broad as investigating “crime.”

Under the language of Mueller’s appointment, i.e., his charter, this broad grant of jurisdiction gives Mr. Mueller the argument that the Comey/Mueller investigation into Russia led him to Manafort because of his prior lobbying work. While critically lacking is a nexus between Manafort’s alleged illegal activities and the Trump campaign, the broad language of subsection 2 of the Special Prosecutor’s Appointment allows Mueller’s tentacles to reach far and wide, with only the most tangential relationship to “collusion,” or Russian interference.

The raid on Michael Cohen’s property appears a fine example of the minimal and distant relationship with the purpose of the investigation. The FBI seized documents relating to an alleged 2006 affair between Mr. Trump and Stormy Daniels. According to CNN, a source familiar with the warrant described it as broad in scope, and included bank records. CNN also reports that communications between Mr. Trump and Mr. Cohen were also seized. Where is the relationship to Russian interference and a link to the Trump campaign? There may be none. Again, Rosenstein so beautifully crafted it that it may not ultimately matter if there is none.

The Raid of Cohen’s property may be Mueller’s endeavor to circumvent Mr. Trump’s attorney-client privilege.

With a grant of jurisdiction already unreasonably broad, given that Mr. Trump has not yet agreed to be interviewed by Mueller or his team, the sudden raid of Cohen’s property also raises the specter that it is an abusive circumvention of Mr. Trump right to enjoy privileged attorney-client communications, by breaching into privileged communications between Mr. Trump and his attorney. The heavy-handed and likely unnecessary raid has pierced the attorney-client privilege as it relates to evidence seized.

Now, even though the Southern District has directly accessed and seized, potentially, communications between Mr. Trump and his lawyer, and not Mueller’s team itself despite Mueller’s referral, what in the world prevents the Southern District DOJ from handing over these privileged communications between Mr. Trump and Cohen back to Mueller? The answer is nothing, except for Robert (let’s call him by his nickname “Bob,” shall we? everyone else does) Mueller’s magnanimous integrity. Bob Mueller can now probe Mr. Trump about private matters having nothing to do with Trump campaign/Russia that Mr. Trump confided in his attorney about.

It’s hard to fathom how she-who-happily-gobbled $130,000 to close her mouth (but not her legs), Stormy Daniels, will aid Mr. Mueller in the continuous manifestation of his unquestionable integrity in the pursuit of justice. Absent a romp with Stormy Daniels in Moscow, Cohen’s payment relative to the 2006 affair payment to Daniels has no Trump/Russia connection, but, given the breadth of Rosenstein’s generosity, Mr. Mueller can argue even this tawdry affair relates to the Russian interference investigation, at least to the extent it arose when he happened upon it.

The Special Prosecutor was set forth by Mr. Rosenstein to investigate Russian interference into the 2016 election, and to investigate links between the Trump campaign and Russian actors. So far, the probe has traversed into areas apparently far beyond that realm, but because of the scarcely limited grant, Mr. Mueller may use his grant to investigate domestic, and ordinary federal matters and crimes. He has gained leads in the first instance through unlawfully obtained surveillance, and a wrongfully initiated investigation by Hillary Clinton. Nevertheless, Mr. Mueller continues down this poisoned path, leading those who still believe in the promise of the Federal Constitution to fear that the greatest threat to democracy is not Russia, but the vast, hostile sea of the all-knowing, big-brotherly deep state.

Mr. Trump is right when he calls this raid disgraceful, and that is putting it mildly.