By Indy Hack
I’ve spent the past few years covering human rights issues within segments of the Tibetan community. At times when people were demonstrating outside the Dalai Lama’s public appearances, it looked as if the mainstream media was starting to shift a little bit, sensing his potential fall from grace, but certain key figures would run to his aid and back him up.

The Dalai Lama, 82, has a bedrock of support within some of the older elements of celebrity society and they, in turn, have contacts and influence within organisations such as the Associated Press. Although there isn’t a systemic or organisational support of him there are key proponents that help him. This makes the Dalai Lama a very hard target to criticize.An aspect I’ve found quite interesting is his approach to his health problems. I’ve known for some time that the Dalai Lama has been undergoing treatment for prostate cancer and it’s progressed to further parts of his body. Now he’s in advanced stage 4 and the prognosis is bleak. He’s not expected to survive beyond the end of the year. 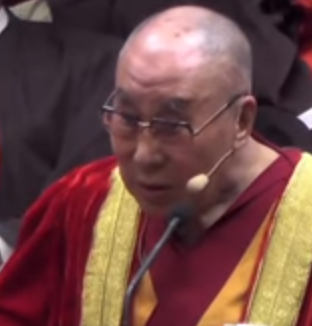 Despite this, he maintains he is in good health, or has no specific health problems – those are his own statements and the public statements of his office. Yet at the same time he’s cancelling overseas travel and even canceling some public appearances in India.

When you see footage of him rather than the stage-managed photos of specific events, it’s also very obvious how limited his movement is. Just watch the way he walks or the way he tries to bend over. He’s got no back strength at all because the tumors are progressing throughout his lower spine.

If you contrast the way he appears and the spate of cancelled public appearances with the statements that he’s in good health it’s obvious that he’s lying. More obvious than at any other time. This goes to the very heart of why he can’t be criticized – he’s lying, the main media outlets know he’s lying, but no one has the courage to publish the fact that he’s dying.

As soon as one of them starts, the rest will join in, but that will probably only be in his final week. They’ll ignore the fact that he’s been giving them a load of BS and then just run weeks and weeks of the stock footage of all his wonderful humanitarian deeds. It’s not that the main outlets are protecting him, it’s simply that they’re too risk averse. That’s how he gets away with it, the same way all powerful media figures get away with abusing their position.

The Phayul report today stated that the Dalai Lama has been declared fit by his physician:

According to the story, the Dalai Lama was flown to Delhi for an intensive physical check up because he was suffering from a minor throat irritation and common cold. Can you recall the last time, or any time for that matter, that you heard of someone being flown across country for a sore throat and cold?
If you watch him on 18th March trying to place medals over students heads at the Jammu University in India, it is obvious that he has serious physical problems https://www.youtube.com/watch?v=&feature=youtu.be&t=2h8m19s
The surprising thing isn’t that the Dalai Lama is dying of cancer, it’s that the mainstream outlets aren’t reporting it at all. 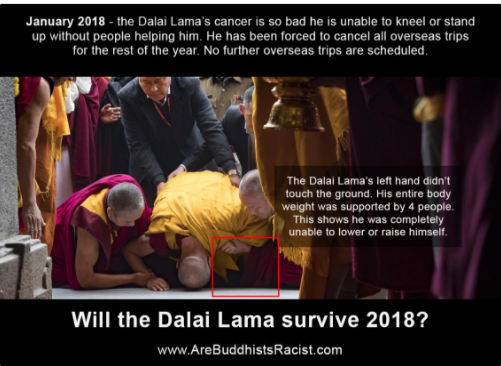 ***
Indy Hack is an Independent UK journalist covering allegations of human rights abuses by the Tibetan Government and the Dalai Lama. Follow Hack on Twitter