Some of her fans think Smallville actress Kristin Kreuk left the sex cult of NXIVM in 2009.

NXIVM has gotten worldwide attention recently because it was revealed that it brands women on their pubic region after taking blackmail worthy material from them to ensure their silence. It was Artvoice that broke the story worldwide.

Kristin Kreuk has been named as a former member. So a number of her fans claim since she has been out of the cult for “almost eight years” she had no way of knowing how far the group degenerated. Some of the more sinister activities of the cult happened since she left.

They defend her silence in not condemning the man who leads the cult, Keith Raniere, by saying she was out for so long, she has zero need to speak out against him or the cult.

Just to get our facts straight, numerous sources, who were members of NXIVM at the time Kreuk was a member, tell Artvoice that Kreuk was active in NXIVM well into 2012.

Blogger John Tighe published a secret NXIVM coaches list in August 2011.  We believe it was authentic since he was later convicted of computer trespass. The coaches list he published was used as evidence of his trespassing on NXIVM computers.

Kreuk was not only a member, but she was a NXIVM coach as of Aug. 2011.  That means she taught other students the secret teachings of the women abusing cult. She was listed on the NXIVM coaches list:

Kristin was also named as a prominent member of NXIVM in Feb. 2012 by the Albany Times Union in a series called Secrets of NXIVM.

That series detailed, among other things, how Keith Raniere used celebrities to add glamour and allure to recruit new members. It was the same series that had on-the-record interviews with women who Raniere raped as girls.

Today, in a world of ‘#me too’, Kreuk may or may not have a moral or ethical obligation to speak out against the vile, anti-female practices of the NXIVM cult of Keith Raniere. But she was certainly used to recruit women into the cult who are still in the cult and are to this day being abused.

It was Kreuk who recruited her costar on Smallville, Allison Mack. Mack, in turn, became one of the leaders of the vicious blackmail and branding subgroup of NXIVM called DOS.  That group – and Raniere- are now under federal criminal investigation, according to reports in the New York Times and Albany Times Union.

As NXIVM’s former publicist,  I know Kreuk was used as NXIVM’s star recruitment tool. She was a draw for those who wanted to meet her.  She made herself available to recruit.

I recall speaking with one radio show host who was eager to meet Kreuk and agreed to promote a NXIVM a-Cappella event – if he could have Kreuk on the show. I set it up and he plugged the hell out of it, as I recall. 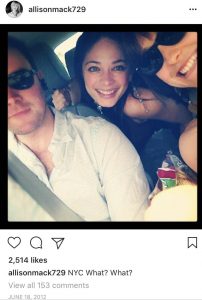 Sources say Kreuk left NXIVM shortly after this photo was taken.  This suggests she has been out of NXIVM for about 5.5 years.

To date, Kreuk has made no public comment about NXIVM.  A Google search of her name and NXIVM returns 7,120 results.

I’ve totally fallen down the rabbit hole with this story. The more I google the worse it gets! I can’t believe all these semi-famous women are part of this cult and even recruiting other women as virtual sex slaves for this creep.

Screw Kristin Kreuk for slamming Harvey Weinstein while keeping quiet about her own past as a recruiter for a rapist, screw Allison Mack for being compliant with having her own initials branded on women, and especially screw Keith Raniere for his horrific crimes against women!

This story needs to be blown wide open: start with frankreport.com. Craziness…

Why do we attack the immigrants we so desperately need?